Adapted and published by Welsh writer, Philip Rowlands, ‘A Christmas Carol: Revisited’ is set to make its debut concert reading in New York this December. Thrusting Ebenezer Scrooge into modern day Manhattan, could Rowlands’ adaption open a new chapter for this timeless classic?

Tonypandy, Wales -- (SBWIRE) -- 11/09/2012 -- Like all good things in life, the passage of times bring a need for change. Nobody believes this more than Welsh author Philip Rowlands, whose contemporary adaption of Charles Dickens’s ‘A Christmas Carol’ is taking the literary world by storm. In fact, the story has been so popular that it is about to make its debut concert reading in New York City.

‘A Christmas Carol: Revisited’ takes Dickens’s original story and drops it into to modern-day Manhattan. Ironically, the story’s concert reading will take place in the same city, being performed at The House of the Bar on December 19th.

However, before making its impressive trip across the Atlantic, Rowlands’ adaptation enjoyed an abundance of home-grown success. The book was featured on BBC Radio Wales last November, being awarded a positive critique by radio host Roy Noble. As Rowlands explains, the positive feedback generated an urge to spread to word.

“Earlier this year I decided to email the secretaries of Charles Dickens Societies around the world. The most exciting of all the responses was the one received from The Entertainment Committee of the New York City Bar Association. They requested permission to sponsor a Concert Reading of my book, which has now been planned for this December,” he says.

The performance is taking place on a one-off, non-commercial basis, with attendees being asked to voluntarily contribute something in a '5' denomination for a children's charity.

Rowlands is delighted that his book is getting the attention and acclaim it deserves, something he feels Dickens himself would approve of.

“I tried to consider what issues Dickens would have written about today, hence my decision to set the story in New York and not London. America has long since assumed the mantle once worn by the British Empire and has been at the heart of most of the major global events of the 21st Century,” he adds.

Attention has even been garnered by noted figures in the literary world, including writer Nigel Crowle. He commented, “I thought it was very, very, good indeed. Phil put a new twist to it. It was great. .He's got some great imagery. . .fantastic. . . I loved it.”

For more information on the book, where to purchase and to obtain a sample chapter, please visit: http://www.achristmascarolrevisited.info/

Rowlands can also be followed on social media:

About the Author: Philip Rowlands
Philip Rowlands lives in Tonypandy, South Wales. He has extensive experience within the writing sector. 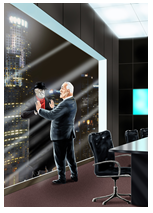