Marko Stout Bewilders Once Again with His MicroCinema Production

The $64,000 canine gains acclaim for Marko Stout once again. Contemporary art is all about the new wave of today. Different artists have used the medium of MicroCinema to depict their thought processes and perspective on how modernity affects the life of every person. Marko Stout is a well-known contemporary artist in New York, who also uses this medium to expose his thoughts. His works are exhibited in galleries all over New York and they can also be witnessed and purchased online. Amongst these is the much talked-about print of canine, the ‘Martini Dog’.

New York, NY -- (SBWIRE) -- 12/17/2013 -- The ‘Martini Dog’ of Marko Stout not only gets high acclaim but an appreciation worth $64K and this makes people wonder about the remaining undisclosed works of the artist this year.

Marko Stout is a famous contemporary artist exhibiting his work in New York City and through online genres. His art work includes many short films and small theater exhibitions depicting the emptiness of modern life wherein the inner self is lost and is vacuumed in by the chaos all around.

Microcinema is one of the favorite mediums of contemporary artist s to ventilate their thoughts. It is usually a low budget film shot through personal video cameras or a low budget exhibition which screens a series of shots or images. Although the medium is seemingly simple, the subject is quite dense. Quite similarly to paintings and photographs, Micro-cinematic production is also successful in conveying the deep thoughts of the artist.

Some of his famous works include the ‘Martini Dog’, ‘Graveyard of Buried Hopes’ and ‘Dysfunction on 14th Street.’ All of these works and many others are short films based on the hollowness of the common man and woman sharing with each other the gloom and despair which is the gift of the modern world. The general theme that they follow is losing the inner self to the outside, which according to Marko Stout, is the ‘greatest hazard’.

The works of Marko Stout have been critically acclaimed and in 2012, his film was even ranked as #3 amongst the top ten ‘Must See’. The works of Marko Stout are up for sale through exhibitions and through online medium. One of the very famous films is the ‘Martini Dog’ which was sold this year through the Spectrum Exhibition for $64,000. The interesting thing is the signature of Marko Stout giving this print of ‘sophisticated urban canine’ a semi-autobiographical note.

About Marko Stout
Marko Stout (http://www.markostout.com) is a multimedia artist based out of New York City, best known for his stimulating narratives of contemporary urban society, where subjects often appear in a moderate state of distress, overwhelmed by their modern high-tech uber-paced environment, while still maintaining a chic detached sexy demeanor of a sophisticated twenty-first century city dweller.

Marko Stout was born in South Africa and relocated to the States as a child. He received a university degree in evolutionary biology from Princeton University and earned his medical degree from Columbia School of Physicians in New York City. Marko developed his passion for art while living aboard a houseboat in a bohemian San Francisco community. Upon his return to New York City Marko Stout rapidly established himself as a part of New York City’s downtown art scene, drawing inspiration from local street artists and the city's numerous galleries and modern art museums. 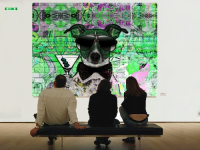