Bro Bong is the first ever beer bong holder that can be hanged on any doorway or glass surface with the help of a suction cup. Matt Opalski needs to raise $6,250 through Kickstarter to start manufacturing Bro Bong.

Chicago, IL -- (SBWIRE) -- 10/27/2014 -- Matt Opalski’s just launched crowdfunding initiative is about the creation of the world’s first ever portable and LED powered beer bong that can be attached to any typical window of door way. This easy to use product has been designed to bring about a change in the way people look at doing beer bongs. While using Bro Bong, users are only required to slip their beer bongs into the holders and pour their favorite drink in the funnel. The product allows three friends to test who is the fastest amongst them in beer bonging.

Unlike many other ordinary beer bong holders in the market, Bro Bong comes with a heavy duty suction pump. As a result of this strong suction capacity, it can be attached to any glass window or door. As per the findings of tests conducted, these suction cups are capable of hanging a Bro Bong for more than a week and a rating of 80 lbs. The tube can be snapped easily because of the easy mounting clips. Using Bro Bong causes no damage to the doors because the product doesn’t have any screws.

LED powered Bro Bongs are fitted with their own battery pack. Partying becomes more exciting with Bro Bong as there is a variety of colored lights that users can choose from to illuminate the beer bongs. The product can be stored and transported easily, thanks to its pair of durable hinges on each arm.

The biggest challenge for Matt Opalski and his team is to streamline their manufacturing process so that the product is cheap to produce and purchase. The largest part of funds raised through Kickstarter will be spent on purchasing a CNC router. This will make it easier for them to cut the Plexiglas sheets with minimum chance of cracking.

About Bro Bong
Bro Bong is the first beer bong holder that hangs on a typical door way or window. This LED powered, portable, beer bong holder is available now for pre-order at Kickstarter. 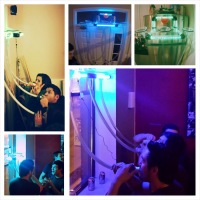 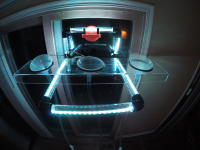 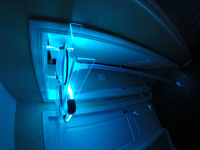 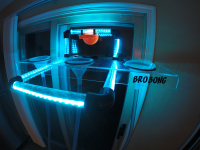