Illuminating the persistence and humility of clinicians and patients in hospitals, Philip Benz’ latest novel focuses on the people and process of ground-breaking medicine.

Portland, OR -- (SBWIRE) -- 09/21/2012 -- In the real world, finding a cure for cancer is a breakthrough every medical professional dreams of. Now, for the first time, writer Philip Benz offers a fictional glimpse of the discovery in his new novel – ‘Medicines & Poisons’.

A brilliant young physician, Vic Fairchild may have invented a new cure for cancer, but his chronic insecurities keep him from finishing it. Even though he’s at the top of his field he feels he must compete with every doctor he encounters, including his father and ex-girlfriend.

Faced with dwindling options as Big Pharma refuses to fund his project, Vic prepares to abandon his work when Jack Carrington, young son of the Institute’s wealthy benefactor, becomes sick with the kind of cancer Vic’s treatment might cure. Parental desperation and the power of wealth force Vic to try his experimental therapy on Jack, even though he knows it’s far too soon to use it on humans.

After watching Jack quickly recover, a Big Pharma exec sees new business potential in the therapy and agrees to fund a clinical trial. To Vic’s surprise, more cancer patients improve and he starts enjoying his newfound fame and success. But when arrogance replaces well-earned pride, he alienates what few friends he has and sees his father’s cautions about hubris only as reminders of insecurities he’s endured forever. When the clinical starts going badly, Vic is humbled as he watches his patients start dying. He desperately seeks ways to help them but as the FDA shuts down the trials, Vic is well on his way to losing everything.

Written with humor and pathos, this novel of medical intrigue and family relationships illuminates the persistence of both clinicians and patients in hospitals. As the author also explains, the novel places a special focus on the obstacles that surround the world of medical breakthroughs.

“Embedded within the novel is the interplay between medicine, money and patients...and money usually wins,” Benz explains.

He continues, “It’s important because of the current health care reform debate. I hope readers find the story a fun read, but they should also get a sense of how choices for treating patients and developing medical products are made. Although a work of fiction, the story is grounded in fact.” Benz has extensive experience developing medical products and training clinicians.

Medicines & Poisons, a VoxLuces book, is now available in Kindle and paperback editions from Amazon and other booksellers. An ebpub e-book version is due for release in coming months.

About Philip Benz
Philip Benz has worked in the medical device industry for over twenty years. He is an inventor listed on two utility patents and several of his products are currently used in hospitals throughout the world. He earned his master’s degrees at the University of California, Los Angeles. This is his second novel. 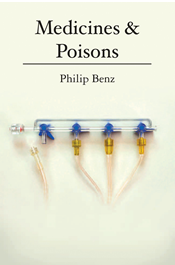