Star of Broadway's “Wicked” and “9 to 5: The Musical” makes South Florida debut at Parker Playhouse with SiriusXM star Seth Rudetsky as pianist and host.

New York, NY -- (SBWIRE) -- 02/14/2014 -- Megan Hilty, was a breakout star of NBC’s “Smash” and starred on Broadway in “Wicked” and “9 to 5: The Musical.” She currently stars as Liz on NBC’s “Sean Saves The World” with Sean Hayes of “Will & Grace” fame. She makes her South Florida concert debut when she joins the WinterStage Concert Series at the Broward Center's Parker Playhouse on February 20 at 8:00 PM for one show only - following on the heels of January's sold-out launch of the series with "Will & Grace" star Megan Mullally. Series host and Sirius/Radio star Seth Rudetsky will join Ms. Hilty at the piano. For tickets please visit the Parker Playhouse ticketing page or call 954-462-0222.

Prior to joining the original cast of NBC’s hit new comedy “Sean Saves the World,” Megan Hilty starred for the past two seasons as the triple-threat Ivy Lynn in NBC’s musical drama “Smash.” A native of Seattle, Megan made her Broadway debut as Glinda in “Wicked” shortly after graduating from prestigious Carnegie Mellon University, and went on to perform the role in both the national tour and in Los Angeles. She has also appeared on New York stages as Lorelei Lee in the Encores! production of “Gentlemen Prefer Blondes,” for which she earned rave reviews. For her critically acclaimed portrayal of Doralee Rhodes in Broadway’s “9 to 5: The Musical” she received nominations for the Drama Desk, Outer Critics Circle, Drama League Awards, as well as the L.A. Stage Alliance Ovation Award. She has previously performed with the National Symphony Orchestra at the Kennedy Center, the New York Philharmonic at Lincoln Center and with the Cincinnati Symphony.

Her voice was featured as Rosetta in Disney's “Tinker Bell: Secret of the Wings” and also in Disney's “The Secret Life of Magic Gourd,” “Phineas & Ferb,” “Glenn Martin DDS,” “American Dad,” “Tinker Bell and the Pixie Hollow Games,” “Robot & Monster” as well as singing as Snow White in the film “Shrek the Third.” Megan recently wrapped production on Summertime Entertainment's animated film “Legends of Oz: Dorothy’s Return” with Kelsey Grammer, Hugh Dancy and Lea Michele, slated for release in 2013. She can also be heard alongside Placido Domingo on the opera star’s duet album. Megan was recently signed to Sony Music in a partnership between Sony Masterworks and Columbia Records. Her new album, “It Happens All The Time,” was released last spring, including fresh interpretations of compositions by contemporary songwriters and producers.

Seth Rudetsky is the afternoon Broadway host on Sirius XM satellite radio. As a musician, he has played piano for over a dozen Broadway shows including “Ragtime,” “Les Miserables,” and “Phantom of the Opera.” He was also the Artistic Producer and Music Director for the first five annual Actors Fund Fall Concerts, which included “Dreamgirls” with Audra McDonald (recorded on Nonesuch Records) and “Hair” with Jennifer Hudson (recorded on Ghostlight Records, Grammy nomination). As a comic he was awarded “Funniest Gay Male in NY” at Stand-Up NY and is a three-time Emmy nominee as a writer for “The Rosie O’Donnell Show.” As an actor, he made his Broadway debut in “The Ritz” directed by Joe Mantello, and has appeared on television on “Law and Order C.I.” and “All My Children.” As an author, he wrote the books The Q Guide to Broadway, Broadway Nights, and just released his new novel My Awesome/Awful Popularity Plan on Random House, and as an audio book on audible.com featuring “Modern Family’s” Jesse Tyler Ferguson, “SNL’s” Ana Gasteyer, “Smash’s” Megan Hilty among others, and writes a weekly column on Playbill.com. He recently added "television mogul" to that long list as SethTV, his new, web-based entertainment network, launched. This past summer he co-produced of the critically acclaimed play Unbroken Circle by James Wesley, and is co-playwright and star of the hit new Off-Broadway ‘disaster movie musical’ “Disaster!” running now at St. Luke’s Theatre in New York.

About the series:
This Broadway concert series was inaugurated in 2011 by Mark Cortale at The Art House in Provincetown featuring Seth Rudetsky as pianist and host. In its third season last summer of 2013, the series presented Broadway superstars like Patti LuPone, Chita Rivera, Sutton Foster, Audra McDonald, Megan Hilty, Megan Mullally, Christine Ebersole, and Joanna Gleason. The Broadway @ series also premiered last season in New Orleans, in Australia with Megan Mullally and in London’s West End with Patti LuPone at the Leicester Square Theater. This season of 2013-14 the series begins in Los Angeles @ The Broad Stage, Fort Lauderdale @ The Parker Playhouse, The Poconos @ The Stroudsmoor, Woodstock, NY @ The Woodstock Playhouse, Hartford @ The Bushnell, Detroit @ The Berman Center for the Performing Arts… and at a city near you soon! More info at markcortalepresents.com. 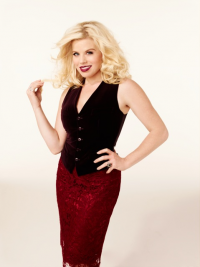