Written by Anthony DiVerniero, ‘Messenger From God’ helps people from all walks of life recognize the battle between good and evil within themselves and the world. Using the fictional story of a modern business executive with the prophetic gifts of Nostradamus, readers are compelled to look at today’s society and determine their purpose within it.

North Branford, CT -- (SBWIRE) -- 09/13/2013 -- While many thought-provoking novels are written for a specific audience, a powerful new book by Anthony DiVerniero boasts as wide an appeal as any book can. Fusing fact and fiction to examine everything from dominant world events to the individuals bonds of romance; ‘Messenger From God’ provides more than just a gripping narrative.

By examining today’s eclectic society and melding its conclusions with fiction inspired by the author’s own life, DiVerniero’s debut release will empower any reader to seek out and discover their own unique place within themselves and the world around them.

The charred steel girders of the World Trade towers, a nuclear explosion, storms and tsunamis, a beautiful woman, an ancient prophecy, and a government that wants to discredit him… Paolo DeLaurentis has the prophetic gift of Nostradamus and is haunted by visions foretelling catastrophic events. Does he possess a gift or a curse? 1963, a third grade boy, Paolo gets sick. His parents, doctor, and a priest watch in awe as the child lies in a cold bath at death’s door. He is enveloped in a globe of white light and recovers.

Two years later, Paolo awakens from a dream of a woman-the love of his life. He won’t meet her for another thirty years, and the dream is forgotten when another vision-the tragic deaths of two of his friends—comes true. After college, a desire deep within Paolo beckons him to travel to his grandfather’s village of Ottati, Italy. This begins Paolo’s quest to find life’s balance of love, tragedy, forgiveness, and identity. Despite lingering threats from his nemesis, NSC director Doctor Colin Payne-a high-ranking government official—Paolo combines what he learned in Italy with his gift of prescience to become a wealthy businessman, charismatic leader, husband, and father. He finds the woman from his dreams and their love is so powerful it just might change the world. Paolo is generous with his financial and spiritual wealth as he lives his life searching for beauty and truth. But when his visions of tragedy escalate, will he be able to warn the world in time?

Messenger from God illustrates the battle between good and evil within the world and ourselves and asks: What is our purpose in life?

As the author explains, his novel is inspired by very real events.

“I’ve experienced a lifetime of joys and tragedies, just like billions of others. By portraying my personal experiences with a fictional twist, I hope my narrative resonates with all readers and inspires them to examine their own lives. This certainly is a unique brand of ‘fiction for real life’,” says DiVerniero.

“Great read could not put it down. I made a connection with the places the book speaks about. This book explains to us how we should be towards one another, it causes us to think, and how we are wrapped up in the world we do not take the time to see what is happening around us. After reading this you will come away with a whole new outlook,” says John Sarno, reviewing the book on Amazon.

F. Arciuolo was equally as impressed, adding, “It's not a fairy tale, it's a story that is plausible and believable and perhaps hopeful as well. Take from it what you will - that's the beauty of this book.”

Urging readers to question what they would do if they possessed Paolo’s gifts, ‘Messenger From God’ uses suspense and romance to draw readers in, while showing them a glimpse into the nature of present-day society.

About Anthony DiVerniero
Born and raised in Connecticut, Anthony DiVerniero is a business executive, pilot and published poet. Taking his first flying lesson at 16, his flying career was put on hold when three years later he was diagnosed with a benign brain tumor. Eventually, his aviation career included pilot, aircraft salesman and businessman. As he began to question life amid personal tragedies, he turned to poetry. After reassessing the meaning of family, DiVerniero retired from flying and spent the next fifteen years as a medical executive. For the past six years the path of his life’s journey once again put him in the pilot’s seat. He is currently writing the third sequel to “Messenger From God.” 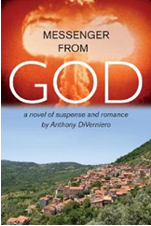