Set to take the stage next August and play host to over 80,000 music fans, Friends of Nature Music Festival also holds the prestige of the city’s first completely eco-friendly music event.

Miami, FL -- (SBWIRE) -- 11/08/2012 -- Miami is renowned around the world as a hub of culture and diversity, boasting some of North America’s largest festivals and most sought-after shows. However, a new chapter will begin on August 31st 2013 as the city debuts yet another global accolade – a 100% eco-friendly music festival.

Dubbed ‘Friends of Nature Music Festival’ the event aims to raise awareness about the planet through two days of spectacular music, peace, entertainment and a wide variety of activities and exhibitors. While setting the standard by being 100% sustainable in itself, the ground-breaking festival is set to take the city by storm.

“Friends of Nature Festival was created with the idea of starting a movement to raise awareness about our planet and to push major companies to produce and promote more green products. We believe that we can still enjoy the things we love, we just simply have to make sure we are not being selfish with our planet,” says Ines Galindo, Owner of Eyeness Productions who are planning the event.

Continuing, “To be a concrete role model, Friends of Nature Music Festival is going to be completely eco-friendly, from the sponsoring products to the tickets sold. We are determined to work as role models for other events and festivals by having fun and giving back to our planet at the same time.”

Giving back is clearly on the agenda, with Galindo and the rest of the festival’s team choosing to donate a portion of all festival profits to a nominated charity. For the 2013 festival these funds will be given to the Ocean Preservation Society (OPS).

“Ocean Preservation Society is a non-profit that creates film, photography and media to inspire people to save the oceans and animals. They produced their first documentary film in 2009, The Cove, which has won over 70 awards globally including the Oscar for Best Documentary Feature in 2009,” Galindo adds.

To further their environmental commitment, the festival’s Management team is planning to source all power from natural sources such as solar and wind power, while ensuring that all products sold remain true to their 100% eco-friendly mandate.

Those interested in purchasing tickets, sponsoring the event or enquiring about trading, can visit the festival’s official website, here: http://www.fonfest.com/

About Friends of Nature Music Festival
FRIENDS OF NATURE MUSIC FESTIVAL is bringing a new face to our community with all the fun and innovation Miami is known for and at the same time raising awareness about our planet. FON FESTIVAL is completely eco-friendly festival from the sponsoring products to the tickets sold. We are determined to work as role models for other events and festivals by having fun and giving back to our planet at the same time. 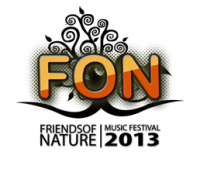