Michael Marshall is a hip hop soul singer who has been producing music since 1985, and returns to promote his fourth solo album with a music video for the first single.

San Francisco, CA -- (SBWIRE) -- 10/17/2013 -- RnB and Hip Hop Soul are giant genres with some of the world’s highest grossing musical acts, but it was not always the case. As the genre was becoming mainstream recording artists who did not fit comfortably in the rap bracket were left behind, including those who pioneered the style now so popular with young artists. Michael Marshall was one of those pioneers, and he has returned to the scene with a fourth solo album entitled Simply Meezy, from which the first single, ‘Do You Miss Me’, has been released with a music video.

Michael Marshall has a distinctive style, now popularized as Hip Hop Soul and employed by everyone from P. Diddy to Mary J. Blige to Usher, is back in its purest form on his latest album. The much anticipated first single to be released has an official music video that tells the story of the track with a unique visual flare.

The ‘Do You Miss Me’ video was directed by Official Multimedia's Martin Wood, who graduated with a Masters in Multimedia and recently made waves with his 360 degree video project entitled Concealed 360. His distinctive style can be seen in the use of subtle visual effects to give the video a premium polish that reflects the smooth but sharp style of Michael Marshall.

A spokesperson for Michael Marshall explained, “Michael has had a long and storied career in music, and his transition to a solo artist marked the maturation of his talent from a trailblazer to an established institution. His style has been so influential that while he was once ahead of his time, that time has now come, and his work sits comfortably in the highest echelons of modern RnB. The Do You Miss Me video is sure to catapult him to new heights and may finally get him the recognition he so richly deserves.”

About Michael Marshall
Michael Marshall is an urban singer with an edge, collaborating since 1985 and now a solo artist in his own right, Michael is releasing his fourth album ‘Simply Meezy’, after releasing two albums in less than a year in 2005. His distinctive style was ahead of its time and now is replicated by many RnB big hitters, but the original old school style remains unique and continues to evolve on his new album. For more information, please visit: http://www.michaelmarshallusa.com/ 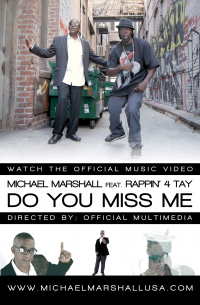