Produced by the ARIA-award winning Peter "Reggie" Bowman, Mike captures his triple-threat prowess perfectly on this release. Not just with the booming vocals and truly mind-blowing guitar playing he is known for, but with some incredibly deep, personal and somewhat confronting songwriting.

One listen to the first single from the release "Build You Up (To Cut You Down)", and you can immediately feel the sheer passion and pain as Mike describes the constant struggle of attempting to find his way as an artist in on often cruel and unforgiving music industry. Mike states "I don't like sugar-coating it, this business is tough and can be incredibly soul-destroying, but rather than just keeping it bottled up inside, I had to write about it, which was incredibly cathartic on this particular track."

Title track "Two Lucky Stars" shines with a beautiful sense of honesty and sincerity on the topic of difficult yet unrelenting love. A warm and heartfelt ballad, this piece perfectly captures the softer and more sensitive side of this hard-edged blues man.

In addition to the nine original tunes on this release, Mike has also included a startling array of cover versions, ranging from the reggae-groove of Ray Charles' "I Got A Woman", the low and powerful drone of of Leadbelly's "Where Did You Sleep Last Night", and even the iconic theme from Top Gun "Danger Zone", from Kenny Loggins.

About Mike Elrington
No stranger to the stage Mike averages 130 shows per year throughout Australia, New Zealand, USA and UK, and he has also captured the hearts and souls of many folks at festivals all over Australia, including Bluesfest Byron Bay, Blues On Broadbeach, Bendigo Blues & Roots Festival and Sydney Blues & Roots Festival, just to name a few.

Be sure to wrap your ears around what will be one of the stellar releases of the year. 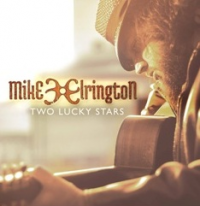