About the challenge and Organo Gold

With a harsh economy, making money is harder than ever. The statistics are grueling – one out of seven people are on food stamps, 27% of home are under foreclosure, and the deficit is at roughly $16 trillion. It is under these tough conditions that Ed Mercer, a life coach and business trainer, has accepted the challenge to take 100 people and turn them into millionaires. The quest will be watched by many, as Mercer is making the journey into a reality TV show. “That will put me into The Guinness Book of World Records,” says Mercer. “I have had 50 people become millionaires with me in the past, and I am on the quest to make 100 new people millionaires.”

Mercer started looking through franchises and commodities to find something his future-millionaires could use to get a leg-up in the field. Ed finally decided on using the product Organo Gold, a premium coffee, to get these every day people to reach the goal of millionaire. Why coffee? “I found that the number one commodity in the world was oil - the number two was coffee,” said Mercer. Not only that, but coffee sells for a good deal more than oil.

He plans on using multilevel marketing techniques, as taught through Harvard, to help these people through their process. He cites famous individuals who have succeeded in the past at multilevel marketing, such as Warren Buffett, Donald Trump, Robert Kiyosaki, and Oprah Winfrey. He is confident that, not only will he succeed in making 100 millionaires, but the world will be thrilled to watch.

About Ed Mercer
Ed Mercer's origins are based in Canada. His early life was very challenging, as he explains: “My mother gave birth to me when she was 15 years old, and the house we lived in was totally condemned, no windows, not even a floor in the house. If you could, imagine living in that type of environment in the wintertime in Canada at 30 and 40 below zero.” It was a challenge, but Ed and his family survived those early years.

Now, Ed Mercer is renown for his fortune. At 27 years old he became a millionaire. He now lives in Costa Rica, and is a life and business coach. He has co-authored three books, including The Eighth Grade Millionaire, and has been inducted in to the Environmental Hall of Fame. He is looking forward to the new reality TV show, where he makes 100 new millionaires. 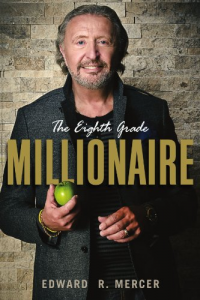