Seattle, WA -- (SBWIRE) -- 08/16/2012 -- Mission Veritas breaks new ground in the sci-fi novel world by embedding QR codes (quick response codes) and hyperlinks to unlock libraries of over 200 visually rich graphics. Reading has been forced to compete with video games for the attention of sci-fi fans world-wide. Murphy rises to this challenge with this innovative technique.

EBook readers simply need to touch the hyper-link on their reading device, such as an iPad or Kindle, or scan the QR code with their smart phones for the novel's print edition, and they're transported to online libraries of images depicting scenes from the story.

The unique medley of content is thanks to Murphy’s duel-skills of writing and graphical artistry. Using his expertise to visually depict life on the remote and rugged Planet Veritas, Murphy’s unique offering is allowing the book to stand out in the marketplace.

“I wanted to go beyond the traditional style of a flashy front cover and few, if ever, subsequent images,” explains Murphy, who hails from Seattle.

Murphy continues, "Reading is not dead thanks to the explosion of E-Reader devices. Keeping in step with technological advances, I felt it necessary to enhance the reading experience with the visual stimulation the next generation of readers has come to demand."

Mission Veritas is, according to critics, unlike anything ever released before. Combining a compellingly gripping story and an online library of visually stunning graphics, Murphy is further immersing readers into another world, satisfying the thirsts of thousands of sci-fi fans across the planet.

“Veritas: The Roman Goddess of Truth

Year: 2076. Earth has been occupied by a superior race, the almond-eyed Carthenogens, and the “non-war” has already cost over a billion human lives.

Black Saber, an elite, covert military cadre formed to resist the occupation, subjects recruits to the qualifying Mission Veritas on a planet where the atmosphere makes candidates reveal their true selves.

Twelve candidates are sent on a seemingly simple mission to land on the desolate planet, travel 100 kilometers, and achieve a military objective. Killian, son of a murdered diplomat, is driven to get into Black Saber. But not all the candidates are equally determined and subconsciously seek to undermine the mission.

With the survival of the human race at stake, the truth will save us all.”

Since its release, the book has garnered rave reviews from readers. Described as “wickedly entertaining and action filled” and “engrossing from start to finish”. Reviews also note, "The graphics really enhanced the reading experience..." and, "The 3-D graphics bring reading books into the new era of computer technology.

Knowing that sci-fi fans don't want the story to end, Murphy has recently announced that he is working a sequel to Mission Veritas, based on the resistance movement led by Black Saber. In addition, he has also announced that the book’s library of graphics will continue to grow, to eventually include image avatars of real-life persons.

About John Murphy
John Murphy served in the Marine Corps before his success in software industry as a coder, DBA, and analytics engineer. He wrote 'Success Without a College Degree', had a TV show by the same name, and a series of popular audio programs.

John's passion evolved into video/audio production, 3D graphic arts and writing action thrillers. He lives in Seattle with his wife, and has three adult sons. 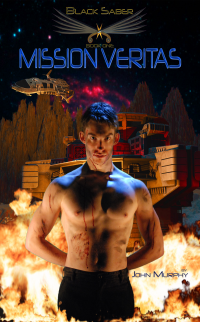