International travelers turn to satellite phones for a variety of reasons in all types of environments around the world. Unlike other types of phones, satellite phone users must judge their choice by different factors beyond just features. How and where they can operate often trumps everything else. “When it comes to the Inmarsat vs. Iridium satellite phone choice, operational differences are far more relevant to the user than the handset features and specs,” explained Clough.

Still, numbers in and of themselves can be deceiving. Both phones work well with clear line of sight to their specific satellite networks. However, reception is more complicated than the fact that the Iridium satellites move to the user and the Inmarsat user must position themselves to the satellites. According to Clough, satellite coverage must be judged in terms of how the phone will be used:

“The Iridium 9555 may experience dropped calls as the satellites move while the Inmarsat signal strength remains constant when you’re in the right position. This can be a particular benefit if you wish to perform data transfers where a consistent connection is required. The article points this out in greater detail as well as several other important differences that affect the user and their choice. It all ultimately boils down to having a clear understanding of where and how you will use the phone in order to make an informed choice.” 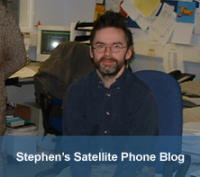