Mohr Publicity: The Next Big Things in Social Media Marketing for 2014

Everyone is asking what the next big thing in social media will be. Is it Google+, Justin Bieber’s Shots of Me, or YouTube icon Jenna Marbles?

Los Angeles, CA -- (SBWIRE) -- 01/17/2014 -- Mohr Publicity, a reputable publicity firm in Los Angeles, predicts the future for social media will be more exciting than ever, but says the world should be prepared for rapid change and lightening fast evolution in the field of Internet marketing.

“In cyberspace, 15 minutes of fame is a lifetime,” says Mohr Publicity CEO Sandra Mohr. ”On the Internet, 15 seconds of fame can be a game changer for an artist or company.”

Lady Gaga is the current Queen of Twitter with over 40 million followers. Comedian Jenna Marbles continues to break view count records on her YouTube channel (with over 13 million subscribers) and Justin Bieber has gotten into the act by financially backing the new “photo selfie” site Shots of Me. It’s a big competition to appease America’s insatiable appetite for screen media and virtual interaction. That’s why one of their top choices for the next big thing in social media is the ever changing, ever growing Google+.

Google, the world’s largest search company, launched the Google+ social media side to their business in 2011. Google has reportedly said that its intention is to integrate Plus broadly and deeply with its other services, sites and web applications, so that it can act as a common, underlying social networking layer. Google has already integrated Plus with Gmail, Blogger, Apps, YouTube and other products to varying degrees. They know how to stay one step ahead in the social media game.

Mohr Publicity’s business is booming as they become one of the more reliable public relations companies in the social media business-delivering hundreds of thousands of visitors each week to new businesses and internet start-ups. Among their services: Adding 10,000 unique Twitter followers to an account within 24 hours, distributing a promotional article to thousands of blogs and media writers in a day or two, or making a client look like one of the most popular accounts on Pinterest.com before the end of the week.

“Building a strong brand doesn’t happen overnight, but it can happen fast,” says Mohr, “and these days, it needs to happen quickly if a company wants to grow and stay relevant.”

With these new and innovative online promotional tools, independent authors, musicians and filmmakers finally have a fighting chance to compete with bigger media companies. New products can be seen by thousands of Internet surfers within a few hours, and a company can show up in the national news overnight. Just be sure to go with a reputable public relations agency like Mohr Publicity to assure safe, quality growth that attracts the right types of fans and traffic in the weeks and months to come. 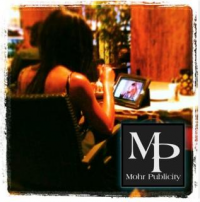