Seoul, Korea -- (SBWIRE) -- 10/09/2012 -- Monster Warz: ULTIMATE, a network strategy game that was developed by FM Studio and published by SK Networks Internet in Korea, is now available for purchase at the Apple App Store.

The game, which was released on October 5, is now accessible to game fans at the following App Store link: http://itunes.apple.com/us/app/monster-warz-ultimate/id553738232?mt=8

According to information released by Mobicrew, an app consulting and marketing company that is working to market the new and exciting game worldwide, Monster Warz: ULTIMATE is an extremely enjoyable simulation/role playing game that involves increasing colonies by defeating other players and reinforcing the player’s own castle.

The game involves researching, building and summoning monsters as well as making allies, collecting resources from the player’s own colonies, fighting a battle and Armageddon.

“The way to being the most powerful ruler depends on your combative strategies for making use of all these elements wisely,” an article by Mobicrew noted, adding that in the game, only three tribes currently remain in the world, and there are endless wars going on between them. Players need to choose one of the tribes, with the weaker tribes enduring more damage from the stronger ones.

Monster Warz: ULTIMATE also includes 200 crystals to help with play, and additional 100 crystals will be sent to all users as a way of celebrating the initial release.

Mobicrew’s Facebook page has seen a lot of traffic lately from people who are clamoring for more information about the game. Recent posts have included an official trailer about the game, as well as news updates about its release date.

Monster Warz: ULTIMATE also includes many other features, including an impressive variety of monsters, the ability for players to reinforce their strength by allying with other players, creating the colonies and then collecting taxes from them, and the ability for thousands of players to join the game. In addition, diverse hero cards with incredible illustrations can be used for fights and research, and a plethora of quests will help players progress throughout the game.

As it says in the article by Mobicrew, with the release of the new game, “an ULTIMATE war for the world supremacy now begins.”

About Mobicrew
Mobicrew is an app consulting and marketing company with the previous Com2uS. Inc. members from Korea. The company helps application developers and indie game studios to increase their profits from A to Z including app consulting, monetizing, advertising, promotion. Mobicrew is in charge of marketing the new game Monster Warz: ULTIMATE in the global market. The game was developed by FM Studio and published by SK Networks Internet from Korea. For more information, please visit http://www.mobicrew.co.kr 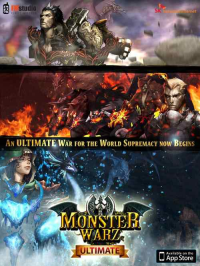