What if Roswell was real and that legendary video was the autopsy of an actual alien? Taking place twenty years in the future, ‘Mortimer (The Leader Within)’ whisks readers on a fast-paced and gripping journey into what may lay ahead for society. With its raw narrative and powerful imagery, the novel is resonating with readers around the world.

Rochester, MN -- (SBWIRE) -- 08/21/2013 -- Many authors use their first novel as a chance to test the literary waters. However, in the case of Rochester’s Anthony Wilson, a debut novel can also hold the potential to compete with its genre’s bestsellers. Hitting the scene with gusto, Wilson’s ‘Mortimer (The Leader Within)’ offers a read that’s as rapid as the narrative contained within.

Readers are left questioning their own beliefs, asking new questions about the past and furiously pondering what the future holds.

Less than 24 hours after being inaugurated President of the United States, James Patrick Martin learns a horrifying secret from our nation's past. Hidden in the shadows for almost a century, this event could have a drastic impact on the immediate future of the country, and the planet.

Burdened with guiding humanity through history's most daunting threat, President Martin must face a gauntlet of challenges, both public and personal, that will test both his skill as a leader, and his mettle as a man.

The author hints at some of what readers can expect.

“What if you learned that Roswell was real? What if it wasn’t a weather balloon that crashed in the New Mexico desert in 1947, but an actual spacecraft? What if the alien autopsy videos were genuine? What if you found out there were more aliens, and that they were coming back to Earth...very, very soon? And what if you learned all of this on your first day as President of the United States?” asks Wilson.

Continuing, “The narrative really does offer something for everyone; aliens, ghosts, humor, political tension, villains, interstellar travel, and futuristic technology.”

To date, the novel has scored an impressive 4.9-star average rating on Amazon and garnered a consistent string of rave reviews.

“Mortimer is a fantastic book that grabs the interests of all kinds of readers, from sci-fi to political buffs and even to historical buffs. It’s obvious that Anthony has done research on things and the historical aspect of this book is accurate and well thought out. This book is a definite page turner and is very hard to put down. It just keeps getting better. The technological devices that the author has created in this book are my favorite part, and I can only hope somebody creates these for real so I can have one,” says Kyler, reviewing the book on Amazon.

Another reader was equally as impressed, adding, “Politics, science fiction, long-kept secrets, fantasy, a family story and some laughs---what more can one ask for in a satisfying read? Each chapter compels the reader to read on. There is enough breath-holding suspense for any mystery buff. This first time author has gifted the reader with unique twists and plenty of food for thought.”

‘Mortimer (The Leader Within)’ is available now: http://amzn.to/14WuHvY

In 2007, Anthony rekindled the original spark and secretly started typing. What began as a study of leadership, morphed into a futuristic/sci-fi/fantasy with a thinly veiled message... you can handle whatever life throws at you as long as you trust in yourself, stay focused, and lean on your friends and loved ones. 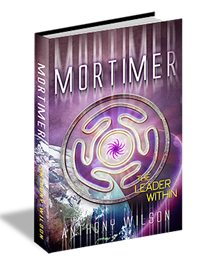