Movie Screenplay in the Works for Robert James' Successful Novel NEXT! The Search for My Last First Date

Orlando, FL -- (SBWIRE) -- 07/15/2016 -- Author Robert James recently announced that after the amazing success of his novel - NEXT! The Search For My Last First Date, he has now been asked to develop a screenplay for a movie based on the book. NEXT! The Search for My Last First Date is a hilarious, light-hearted romance story about one divorced, middle-aged man's quest for the next love of his life. Fans of the book have already requested a movie and it seems their request will soon be fulfilled.

The book revolves around the post-divorce healing process of a middle-aged man, Bob, who is still getting the hang of the new found freedom and some of the setbacks of divorce, the story mainly focuses on finding his way back into the dating scene and finding the next love of his life. During the process of healing and finding love, some "Laugh Out Loud" moments, the readers will be able to see the humor in their own similar situations. Despite having a lot of "real world" intelligence, Bob learns that he knows very little about modern dating and nothing about modern women.

The story has managed to draw praise and appreciation from readers and critics. The fans describe the book as a hilariously unique story that tackles dating from the guy's perspective. These qualities of the book have made it the perfect read for middle-aged men and also women to get a glimpse into how men think.

Fans can expect similar element from the book in the movie screenplay such as the married jeans, internet dating, third date rule - and the process of learning with the women he met. The movie will also go through similar highs and lows, the definitely odd and bizarre, the funny and the heartbreaking, and the timing and chemistry of dating parts that the readers have loved.

The Red City Review of the book admired the story's optimism and humor, the review stated: "Whether you're single, married, or somewhere in between, Robert James' "NEXT!" is an incredibly sincere account of one man's search for his happily ever after. Robert's a normal guy – works in business, went to college, has three kids, goes to church – and a person can't help but wonder when modern dating got so complicated. "NEXT!" is an honest, optimistic, and humorous portrayal of dating in the modern world that proves that even though we all hate dating, the payoff is definitely worth it."

In the world of dating, one of the biggest changes that have occurred in the previous 20 or so years is that dating has moved online, dating apps, dating websites, dating profiles are all common now, however, 20 years ago there was a lot of stigma around this topic. Although today people of all ages are going online to find love and romance, and some of the stigmas have been shed, some things remain that people should to wary of; Robert addresses some of these issues in his book such as online dating safety.

Although, some changes may have occurred, Robert is also able to identify some of the fundamental similarities between dating today and 20 years ago. He uses a light-hearted, humorous yet moving style, to share with his readers, valuable insight to how to succeed in online dating culture, with a unique male perspective, which most readers have found refreshing. He maintains that even today, lying even in the initial phase of dating is a big no, especially for those who are looking for serious relationships. He advises his readers to maintain an honest and open style from the offset in all aspects including the online profile, on the phone, and in person. The dating advice he shares with his readers through the story can help both men and women over 40 maneuver the world of online dating.

The book is currently available at all online booksellers.

About Robert James
Robert James is a lifelong resident of Florida, and is a businessman who loves wine, cooking, travel and enjoying outdoor activities. He has run with the bulls in Pamplona Spain, raced cars, and loves having new experiences in which to write about. Prior to writing his debut book, NEXT! The Search for My Last First Date, his writing was limited to business proposals. His wit and humorous views on events shine through in his writing. Robert James likes to stay connected to his fans and readers through his social media profiles especially twitter and his "Ask Robert" column on his website, where he shares dating advice and his own personal experiences to help others find their NEXT! Besides working on the movie screenplay, Robert is also currently traveling around the country to attend book signing events. 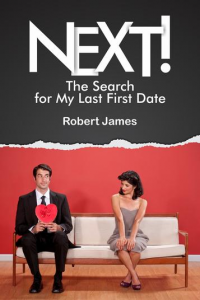