Wanchai, Hong Kong -- (SBWIRE) -- 02/10/2014 -- Mugen Power Batteries, the leading manufacturer of high-capacity batteries for handheld devices, announced the release of its CC-C6903 Mugen Power 3000mAh Extended Battery Case for Sony Xperia Z1, which is proven to extend the usage between necessary recharging, increasing the lifetime of the device by 100%.

“What we’ve done here is something very special. We focused on the consumer during the design and execution phases. That’s what has made the difference. We’ve doubled the longevity of the manufacturer’s battery. That’ll get users through the day and more. That’s what we set out to do, and that’s what we’ve done,” says Nikolai Lebedovsky, CEO of Mugen Power Batteries.

The new battery is fully compatible with the Sony Xperia Z1 and fits well onto the device. This new release comes on the heels of a battery of tests done on the manufacturer’s components. The results are in. Phonearena.com, with its own research, sums up the findings well: the Sony Xperia Z1 ranks at the bottom of the class for battery life. Samsung and LG both provide substantially longer-lasting batteries for their devices. This opens up a large opportunity for Mugen.

“The device is great. The customer complaints are about the short battery life. They want added reliability and capacity,” says Lebedovsky. “We’re letting consumers go longer without recharging, and that’s something worth touting.”

The Mugen Power 3000mAh Extended Battery for Sony Xperia Z1 is available for $89.50, direct from Mugen Power Batteries at: http://mugen.co/mugen-power-3000mah-battery-case-for-sony-xperia-z1-docomo-xperia-z1-so-01f.html?utm_source=pr&utm_medium=pr&utm_campaign=z1.

Mugen Power batteries perform better via higher capacity and reliability, and the superior performance improves run time, often doubling that provided by the original installation. All batteries undergo vigorous QA procedures, resulting in the lowest return rate in the market. All Mugen Power batteries are CE and RoHS certified.

NOTE FOR EDITORS: Mugen Power 3000mAh Extended Battery Case for Sony Xperia Z1 is available, on request, to editors of tech magazines and bloggers who wish to write a review of the battery.

If you’d like more information about the product, or to schedule an interview with Mugen CEO, Nikolai Lebedovsky, please contact: 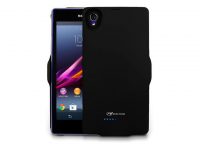