Provincetown, MA -- (SBWIRE) -- 09/26/2012 -- Jeffery Roberson, better known on stage and screen as his drag icon alter-ego Varla Jean Merman, will appear in New York this fall in the title role of Menotti’s musical thriller The Medium at the Marjorie S. Deane Little Theater from Oct. 25th through Nov. 11th. The production makes the move after a summer preview run at The Art House in Provincetown, MA, and is directed by Donna Drake. Elizabeth Hastings, who has conducted for both New York City Opera and the Liederkranz Opera Theatre, also returns as music director. The cast again includes Stefanie Izzo as Monica, Edmund Bagnell as Toby, Shannon Carson as Mrs. Gobineau, Peter Kendall Clark as Mr. Gobineau and Maria Elena Armijo as Mrs. Nolan. The producing team is Provincetown Counter Productions in association with Mark Cortale. Tickets and more information can be found at Counter-Productions.org.

Jeffery Roberson aka Varla Jean Merman starred most recently Off-Broadway in the musical Lucky Guy opposite Leslie Jordan at the Little Schubert, prompting The New York Times to say "If Carol Burnett and Harvey Korman had stood in front of the right pair of funhouse mirrors, they might have resembled Ms. Merman and Mr. Jordan in stature as well as comedic talent.” He played the role of Mary Sunshine in the revival of Chicago on Broadway and in 2010 won Boston’s Elliot Norton Award for Best Musical Performance in The Phantom of the OPRAH. He returned to Boston last past fall to star as Mother Superior in SpeakEasy Stage's The Divine Sister by Charles Busch. Jeffery recently completed shooting the feature films Girls Will Be Girls 2012 and Varla Jean and the Mushroomheads, which played the 2012 festival circuit including most recently at Frameline in San Francisco and is currently available exclusively via Seth TV. He made his network television debut on All My Children, guest starred as Varla Jean in Ugly Betty’s final season and on Bravo's Project Runway Season 5 as the winning model for the show's drag challenge.

Director Donna Drake performed in the original Broadway casts of A Chorus Line, Sophisticated Ladies, Woman of the Year, The Wind in the Willows, 5678-Dance, It's so nice to be Civilized and the original production of The 1940s Radio Hour. She has received an Emmy nomination for TV’s Dear Alex and Annie, 4 Drama Desk Nominations, A Mac Award Nomination and a Theater World Award, and also directed John Tartaglia's Imaginocean, which ran Off Broadway at New World Stages. 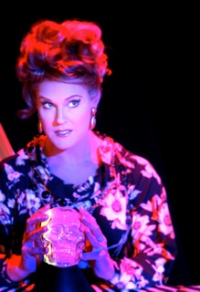