Sterling, VA -- (SBWIRE) -- 03/06/2013 -- Carmen Amato, an established author who divides her time between the United States and Central America, just released the first novel in the new Emilia Cruz mystery series set in Acapulco, Mexico, the city recently reported to be the second most violent in the world. Featuring the first and only female police detective in Acapulco, “Cliff Diver” is available at amazon.com in print and ebook formats to take both Detective Emilia Cruz and readers of this edgy police procedural into the heart of Mexico’s drug war.

“You’re a good cop, Cruz. The kind that die young.” The words of Acapulco’s fictional police chief exemplify the tone of the new Emilia Cruz series. In “Cliff Diver” Emilia investigates the murder of her corrupt police lieutenant and becomes the target of a high-stakes political power play as well as resentment from male detectives. Missing police files, links to a past kidnapping, and connections to a gang working for a drug cartel point the investigation in multiple directions. Under pressure from politicians, other cops, and the powerful police union, Emilia feels like Acapulco’s famous cliff divers, plunging into suspense and praying not to crash on the rocks below.

As noted on Amazon, Amato “has taken the classic mystery and given it a contemporary Mexican twist. The result is an adrenaline-charged novel with the emotional vibe of those who live on the edge.” In addition, readers are already singing the praises of the novel and its strong central Latina character. On her website, Amato writes that she drew on contemporary Latina figures to shape the Emilia Cruz character, including Olympic boxer Marlen Esparza and Justice Sonia Sotomayor.

People who would like to read an excerpt from this riveting new mystery novel before purchasing “Cliff Diver” can find the first chapter on Amato’s website. In the chapter Emilia has a strange encounter with her lieutenant and meets hotel manager Kurt Rucker for the first time; over the course of the book her relationship with Rucker will both complicate Emilia’s investigation and help her to survive it.

In a guest article for omnimysterynews.com, Amato discussed her 2012 political thriller “The Hidden Light of Mexico City” and how a chance encounter with a junkie in Mexico City became the spark that led to the Emilia Cruz series. Concerned about the toll that drug violence is taking on Mexico, Amato hopes that “a mystery series can raise awareness of what's going on in Mexico, with plot elements straight out of the headlines, an authentic dive into one of the most beautiful settings on earth, and a little salsa fresca from my own years living in Mexico and Central America.”

About Carmen Amato
Originally from New York, Carmen Amato is the author of political thriller “The Hidden Light of Mexico City” and the Emilia Cruz mystery series set in Acapulco. Her novels are sharp-edged stories that combine complex plots with characters and settings drawn from her experiences living in Mexico and Central America. Carmen currently divides her time between the United States and Central America but can always be reached on Twitter @CarmenConnects. For more information, please visit http://carmenamato.net 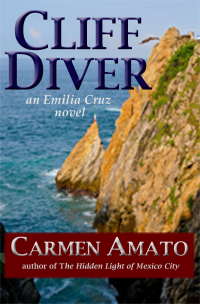