Myth-Busting New Book Details Shocking Claims About Death, Life and Everything in Between

Written by William Pillow with Jack McMahan and Lillian Stover Wells, ‘Souls Are Real! Death Is Not!’ is the most compelling argument yet for the idea of the soul.

Indianapolis, IN -- (SBWIRE) -- 02/25/2014 -- The Center for Disease Control and Prevention has defined experiential evidence as: “A type of evidence based on the professional insight, understanding, skill, and expertise that is accumulated over time.”

In ‘Souls Are Real! Death Is Not!’ author William Pillow, with Jack McMahan and Lillian Stover Wells, offers a myriad of “experiential evidence” for the argument of all human beings having God-given souls that incarnate in the womb, remain with us throughout life, and survive the death of the body to return to Heaven.

People know very little about souls, so they may find this claim hard to accept. Yet recent scientific discoveries demonstrate that babies have memories from as far back as conception — and even earlier! These and other memories acquired before two years of age are called “implicit” or unconscious, since they can subconsciously affect the child and adult’s attitude and behavior, especially if these memories are emotionally traumatic. Regardless whether this capability of fetuses and babies is called “consciousness” or “soul,” it is a more advanced “awareness” of everything happening in and outside the womb than is possible from the immature fetal brain.

Two other recently published discoveries are equally astonishing. First, research in cardiac arrest now concludes that so-called “near-death” survivors actually had died and their memories of “watching from above” and “visiting Heaven” were facilitated by something unknown to science. Second, there are reports from around the world wherein healthy family members perceptibly participated in the death of their loved ones – being caught up in an indescribable spiritual experience involving an eerie transition of their loved ones’ “spirits” into another realm. All of this experiential evidence points to one common denominator – our souls.

Provocative, stirring, and a moving rumination on the implication of recent research, this book will challenge readers to cast aside their pre-conceived ideas and open their minds – and hearts – to a new reality.

Even if the title ‘Souls Are Real! Death Is Not!’ did not shock you, the reasons for it will!

Three recent revelations from science and medicine promise to add new meaning for our lives. These involve how we look at life and death. One is the clinical conclusion that near-death experiences (NDEs) are actual-death experiences (ADEs)—these resuscitated survivors have truly died and their “Heavenly visit” is what we all can expect to experience when our bodies die. The second is the recently published book of remarkable experiences in which healthy family members perceptibly share in their loved one’s death and the passage of his or her soul into a different realm of existence. The third is the discovery of a “consciousness” in the womb, distinct from the fetus—a startling self-awareness far beyond the immature brain and in some aspects even exceeding the typical adult waking consciousness.

This book will challenge even your most cherished beliefs and assumptions. The value of its contents for you and your loved ones will therefore depend upon your ability to sincerely and seriously contemplate the possible meaning of these ideas and concepts if any or all of them might be true.

As Pillow knows, the content of his book will shock some readers, but he believes it is vital that churches and society recognize the positive benefits that can accrue from mother-child bonding and nurturing throughout pregnancy and during the early years of life. Leading psychologists now recognize that the human being’s inner world is dramatically shaped during that period and, since those influences are subconscious and largely involuntary, they account for such feelings as being love and wanted. This naturally translates later into self-esteem, felt security, coping with stress, and relationships with others.

“Researchers’ evidence about the soul should not be controversial but the implications of their findings might be,” says the author, who performed meticulous research in writing the book. “For example, fetuses know and later unconsciously act out any memories of attempts to abort them. Moreover, the leading cardiopulmonary resuscitation specialist even suggests that this ‘consciousness, psyche, or soul’ is a wholly new entity that we can neither account for nor even explain in terms of anything we have ever seen and dealt with before in science.”

Continuing: “Most non-secular religions acknowledge our souls’ existence. But it previously was impossible to discuss souls more specifically than in theologically or philosophically esoteric terms. Although many people are unaware, souls seem to be our personal links with God, our opportunity for more meaningful lives, our ‘ticket’ to Heaven, and reassurance of reunions with loved ones there! Anyone who read a book about near-death survivors ‘visiting Heaven’ realizes that they and their loved ones appear as they did on earth, but without any infirmities! “

‘Souls Are Real! Death Is Not!’ is available now: http://amzn.to/1bRNmMJ

About the Author: William Pillow
William Pillow was educated as a pharmacist, served in the USAF Medical Service Corps, and worked for a Fortune 500 company for thirty-four years. He has written and edited textbooks and written articles for professional journals and trade periodicals. This is his fifth non-fiction book on humanity, human development and behavior, and spirituality. Jack McMahan is a theologian and scholar of science and religion and Lillian Stover Wells is retired dean of psychology at National University. 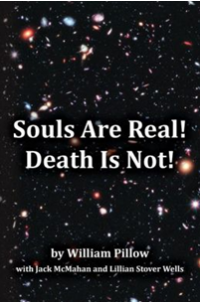