Hollywood, CA -- (SBWIRE) -- 03/30/2012 -- Some of the biggest stars have been discovered in Hollywood, California. That one in a million kind of person who has the “it” everyone is looking for, the whole package. On this night in the VIP club above Avalon (Bardot), many would agree that a new star emerged and her name is Nadine Casanova.

The beautiful and vibrant musician/actress/fashion designer started off the evening with a performance with her band of incredibly talented musicians, Lantz Lazwell, Marc Kalidas, Chance Onody, and Austin Archer. Her voice was sultry yet angelic as she switched between piano and guitar. It was her passion and original lyrics that won the hearts of the audience. She was even wearing one of her own designs, a beautiful long and sleek royal purple dress, sexy yet elegant. On her last song, Vincent Bowman of The Killbots joined the stage as a special guest performer, adding some dynamic excitement to the performance.

As she exited the stage, the other two Killbots, Johnny Edson and Darian Johnson joined Vincent to perform a hip hop set which surely set the tone for a fun and energized night. They blew away the crowd with their unique rapping style and lyrics. The beats were fresh too! After their set, Nadine Casanova took the stage again but this time wearing super sexy, sparkly pants. She introduced herself and her new line, HoneyBe Designs “Party Pants”.

“I created this line to not only support my dream to spread love through music”, she said “But to fund the development of an organization called Globalove which supports the creation of healing centers worldwide.”

Then the music came on, rainbow lights flashing across the stage. Nadine Casanova began to sing as four sexy girls each came out rocking a different color “Party Pant”. This was not a normal fashion show, they did an entire dance performance as she sang her new single “Looky Loo”. It was a hot song, and a hot dance! Turns out Nadine coordinated with choreographer Sarah Gross for the choreography, they obviously work well together. Fortunately for Nadine, she has a great product on her hands because the pants looked great on all the girls even with different body types.

As the event peaked with a super packed room and DJ Chris Jackson “Whole Lotta Love” spinning an off the hook dance set, Nadine Casanova took the stage one last time with The Killbots and Louis King for a collaboration dance track and music video filming of their new hit single “Another Night In LA”. Nadine was accompanied by dancers Sarah Gross and Yanna Fabian. They quickly got the attention of everyone in the room with sexy moves and Nadine's catchy melody. The guys were great too, and got the whole room dancing.

The night continued on with amazing Grateful Friday programming. The event itself has quite a reputation in Hollywood, bridging the gap between the conscious and unconscious world with guest speakers and workshops, live performances, organic foods, art, vendors, healers and more! You could compare the night to a delicious layered cake, multiple flavors, sweet and savory. Nadine Casanova was the cherry on top! 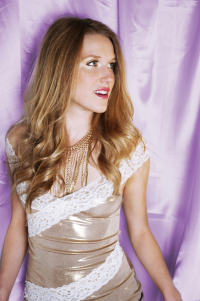 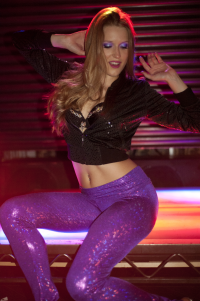 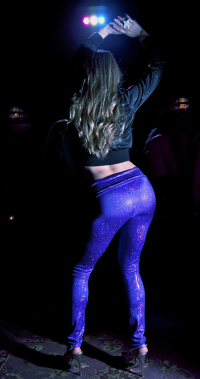