Woodlawn, TN -- (SBWIRE) -- 06/11/2012 -- Retro rock band Blue Sky Alert is determined to breathe new life into the soul of rock and roll with the help of Nashville and hometown Clarksville, Tennessee fans. In the tradition of history’s greatest rock bands, they intend to record their first EP with high-end analog gear at Nashville’s Welcome To 1979 Studio. The Twist is that the band has a time-sensitive goal of raising $3K by Friday June 29, 2012, and they are reaching out to their fans and supporters via a one-of-a-kind promotion.

The demise of the monolithic and controlling record labels has empowered bands to take back control of the music and work directly with their fan base. This newfound control also means shouldering the financial burden of recording and promotion on their own. Nashville area band Blue Sky Alert has found an unconventional way to raise the needed funds while simultaneously giving more than the music back to the fan base that supports them.

In order to gain support to bring their music to the world, the band has created a donation page with Kickstarter—the world’s largest funding platform for creative projects. Supporters can go to the band’s Kickstarter page at http://www.BlueSkyAlertBand.com and make a donation of one dollar or more and receive all kind of great prizes depending on the amount of their support. “Since our fans and supporters are already virtual partners in the music we produce, we wanted to find a way to not only seek their financial help for the recording, but give them even greater access to the band and the creative process in return,” said Blue Sky Alert vocalist and guitarist Skye Mangrum.

The promotion includes everything from EP copies and band merchandise to exclusive concerts, studio session access and much more. The total cost for recording, mixing and mastering the four-song EP is $3,000 and the band is a third of the way there with only weeks to go before the 30-day Kickstarter platform deadline.

Much more than a retro music comeback, the bands combination of chugging guitars, in-the-pocket bass and drums, rollicking gospel-infused keys and soul searing vocals are on a mission to bring the soul back to rock and roll. As husband and wife, vocalist/guitarist Skye and keyboardist Jason Mangrum are just the most obvious aspects of the actual and figurative family ties that run deeply for all four members. The same can be said for the relationship of the band to their fans.

While the musical and familial closeness between drummer and vocalist Matt Whittenburg, bassist Matt Powers, keyboardist Jason and guitarist/vocalist Skye Mangrum is palpable, so are the stakes. The four musicians are laying their recording future on the line as they seek support from fans and friends—both old and new. “This band is both a family and a business,” said Skye. “We all realize that you only get one time around to create art that moves people and we’ve dedicated our lives to producing great music that people of all ages will love.” For more information, please visit http://www.BlueSkyAlertBand.com

About Blue Sky Alert
The Clarksville, Tennessee-based retro-rock band has been rocking audiences with their unique sound in and around Nashville for the last two years. The band is currently embarking on a fund raising promotion to record their first independently released album at the historic Welcome to 1979 Studio in Nashville, Tennessee. The band consists of lead singer and guitarist Skye Mangrum, keyboardist Jason Mangrum, drummer and vocals Matt Whittenburg, and bassist Matt Powers. 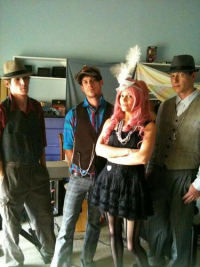