Tooele, UT -- (SBWIRE) -- 03/06/2013 -- Nashville recording artists and Winners of the 2010 Arizona State Colgate Country Showdown Firefly, announced today they will be opening for Scotty McCreery at Utah's Country Explosion on July 19 (http://www.countryexplosion.com). "We are excited to be invited to the play the festival with some of the best talent Country Music," says the band's leader Melanie Merchant. Country Explosion will also feature performances from Band Perry and Billy Currington.

In addition to hitting heavenly harmonies, sisters Melanie, McKenzie, and Madelyn, have a mellow vocal style wicked talent for country music, and are poised to hit the big time. This talented trio soars with their original music and exciting sound. With inspiring lyrics, phenomenal harmonies and brilliant musical prowess, Firefly is the newest star to shine in the Country Music industry! Watch Firefly’s most recent music videos on YouTube and look for Firefly on iTunes and Facebook.

"The girls are amazing and so talented!”
Kimber Coonen, KNIX Radio Phoenix, AZ

They are going to take the world by storm - I love Firefly!”
- Lindsey Sterling, YouTube Violist Sensation

"Firefly will win you over with their infectious, genuine love for music, and talent!”
- Ryan Shupe, Ryan Shupe and the Rubber Band

"We had more people listened to you than than the other station did with 3 Nationally signed acts!”
- Ben Hartman, KMLE Country Radio, Phoenix, AZ

"Pure joy fills the room letting you know you are experiencing something special.”
- Leigh Reynolds, Producer 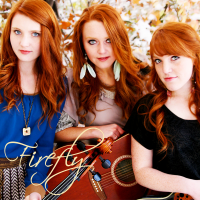