Following a record fifty six years of continuous broadcast, veteran host Chuck Cecil is to be presented with a prestigious award for his tenure on radio’s ‘The Swingin’ Years’.

Ventura, CA -- (SBWIRE) -- 07/11/2012 -- For Chuck Cecil, the numbers are a testament to his success. Boasting fifty six years as the host of radio’s ‘The Swingin’ Years’ and over seventy years in the broadcasting industry, Cecil is a national treasure and a respected public figure among thousands around the world.

To honor and recognize his outstanding achievements, Cecil will be presented with an Award of Appreciation from the National Association of Broadcasters at the July 15th meeting of the Channel Cities Jazz Club in Oxnard.

Born at an Oklahoma ranch on December 26th 1922, Chuck Cecil and his family were forced ‘out West’ during the Great Depression. Following his attendance at Van Nuys High School (alongside Marilyn Monroe, whose wedding he attended 1942), Cecil found his first radio job at KVEC, but was called to serve in the Navy during the Second World War.

Upon returning to civilian life and landing jobs at a number of prestigious radio stations, Cecil found solace at KFI, where he pitched a new Big Band-oriented show to the station’s management. So, the legacy began.

Now recognized around the world as the voice of American Music, ‘The Swingin’ Years’ provides an authority forum for the best in Big Band music. Having produced thousands of shows and conducted hundreds of interviews with some of the Big Band era’s biggest names, Cecil has become a musical legend in his own right.

His upcoming award recognizes the joy, art, and service he has given to millions of listeners, while preserving the essence of the American culture and way of life through his monumental legacy of keeping Swing music alive. Additionally, he is recognized for the monumental achievement of consistently hosting the same show for 56 years.

In fact, just as Cecil thought most of his original audience had died off and he'd get the chance to rest a little, Swing dancing is making resurgence once again. With thousands of new dancers clamoring for Swing music, Cecil’s show is about to be in high demand as young people quench their thirst for learning about the history and culture of the original Big Band era.

More information is available at:

Notes for Editors
‘The Swingin’ Years’ broadcasts weekly and can be heard on WLON-WPPB 88.3 (East Coast) and KKJZ-KJAZZ 88.1 FM (West Coast).

Event will contain dancing and music appreciation, with entertainment provided by the Swing Shift Big Band.

Entrance costs $7.00 for Jazz Club members and $10.00 for members of the general public. 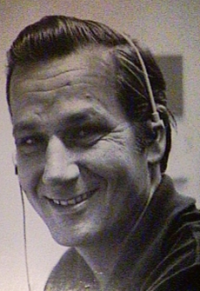