“The Yacon root has recently enjoyed a large amount of public interest, but it's actually been used for food and medicinal purposes for hundred of years,” said company spokesperson William Joyner. “Numerous studies have revealed positive health benefits from regular consumption of Yacon and people are naturally starting to become curious about it. NatureSimple Botanicals is excited to present our potent blend of Yacon root capsules to consumers so that they can enjoy for themselves the effects of this amazing plant.”

The Yacon plant is native to the North and Central Andes regions of South America where it has long been cultivated for it's crisp, sweet roots. These roots contain a compound called fructooligosaccharides which act as a prebiotic and also have been shown to regulate blood sugar levels. Because Yacon sugars are not digestible and can also be produced as a syrup, the plant is popular among many diabetics.

Several studies have also shown other benefits, including weight loss, kidney and liver support, a reduction in cholesterol and tri-glycerides and increased metabolic levels. The supplement was recently thrown into public spotlight after being featured during a segment of a popular daytime television show.

NatureSimple Botanicals believes they offer the highest quality Yacon supplement available, created using a method known as “PlusExtraction” to ensure potency and consistency. Each bottle is packaged to include 60 capsules of Yacon root powder, 500 milligrams each, for a total of 1000 milligrams per serving. The supplement is made in the USA under strict GMP certification standards. Once customers purchase two units they will qualify for free shipping.

“Whether you're trying to lose extra pounds, increase energy levels or improve overall digestive health,” adds Mr. Joyner, “consumers can rest assured knowing that Premium Yacon 1000 delivers a superior formulation at a reasonable price. It's also a great alternative to those who are put off by the taste or inconvenience of Yacon syrup.”

For more information about the new “Premium Yacon 1000” offered by NatureSimple Botanicals, please visit http://www.amazon.com/gp/product/B00GNHJQSQ, or contact William Joyner at 714-629-9512 or via email at PR@NatureSimpleBotanicals.com.

It is important to know that there is a coupon code to use at check out for 20% off: YKO5S6GL 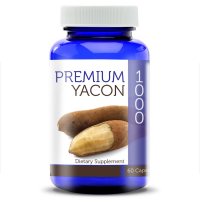