Masterfully crafted by Dewey B. Reynolds, ‘Network of Killers’ is satisfying the thirsts of thriller and crime mystery fans across the nation. Prepare to enter the ruthless world of gangsters and lawmakers who will stop at nothing in their respective quests for justice. Reynolds isn’t just writing from the imagination, drawing inspiration from his tumultuous upbringing in one of Kansas City’s most crime-ridden playgrounds for racketeers.

Kansas City, MO -- (SBWIRE) -- 10/15/2014 -- While crime thrillers have long been a staple of the literary landscape, readers and critics alike are currently crying out for wholly unique new narratives that don’t succumb to recycling of the ‘same-old’ concepts. Thankfully, author Dewey B. Reynolds is answering the call with gusto.

‘Network of Killers’ fuses fact with fiction to give a compelling insight into the motives of stop-at-nothing gangsters, as well as the authorities sent in to control them. Both sides have an agenda, both believe that they are doing the right thing, and the word ‘justice’ has no definable meaning when both sides clash.

An FBI special agent becomes their biggest threat. The federal government assigns him to investigate corruption which involves their stranglehold over the Teamsters Union. Several witnesses are eager to identify those contracted to kill the agent. A diligent detective works closely with a particular witness and is determined to bring the killers to justice. The detective and witness are killed, and the Bernazzoli Brothers and Galluccio put their latest plan into action with the reigning New Orleans crime lord.

The crime families of Chicago, Kansas City, and New Orleans consolidate power to control Teamsters insurance contracts. Murder is the tool used by the bosses to maintain their dominance over the unions. Can the government stop the crime lords before another killing takes place? Will the violent murders of yesteryears come back to haunt them? Find out in this supremely fascinating tale where uncontrolled greed and lust for power are absolute.

“While the narrative may seem far-fetched, it’s incredibly close to home for me,” explains Reynolds, also a screenwriter. “I learned that my father was a career criminal who ‘worked’ with some of the top gangsters in the Midwest and was responsible for many of our history’s most notorious crimes. His rap sheet was awash with robbery, burglary, larceny, prostitution, gas rationing, bootlegging, and illegal Teamsters Union affairs.”

Continuing, “This all served as very bold inspiration for me to write a book about the inside-lives of gangsters. I also decided to pull a chapter out of Kansas City history and revisit a period when Mafiosos were locked into a violent struggle for money and turf in a war zone known as ‘River Quay’. Crime fiction continues to be one of the most popular genres, but my somewhat unfortunate exposure to the real crime underworld allows me to write from a position of authority few other authors can match.”

Readers agree, leaving overwhelmingly-positive reviews. For example, one Amazon customer comments, “This is a story of organized crime located in Kansas City, Missouri. While many may feel that the Mafia are long gone, author D.B. Reynolds in his book, "Network of Killers" leads the reader along paths that prove otherwise. If you enjoy crime, action and a hint of mystery then you will enjoy this book.” 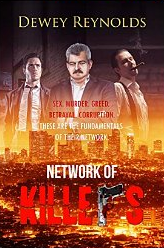