"We believe that 2013 is the year that free-to-play MMORPGs will really come into their own. There are so many new releases and upcoming games that the sheer number of choices can be overwhelming," said Markus Fournier, editor. "That's why we recently published the new Top MMORPG 2013 feature post which can help players find the best of these free MMOs. It's not just a question of which one has the nicest graphics or biggest map, it's more about the quality of the content and gameplay. What's more, we really tried to pick the ones that have very active yet friendly communities though that is rather hard to find these days. Right now we are writing more articles about new 2013 MMORPG games. It's going to be a very exciting year."

Fournier went on to explain the website's goals by stating that, "There is nothing too serious here; we don’t think of ourselves as 'game journalists' at all. Rather, we are gamers who write for other gamers. We have opinions but we don’t like to rant."

Some of the high-profile upcoming games this year are The Elder Scrolls Online, Blade and Soul, ArcheAge, and Wildstar. Since the Topfreemmorpg.net website focuses more on free-to-play (f2p) MMO games that are currently available, these titles will be featured in the website when they are launched or when the English version is released.

The new 2013 MMORPG games website was created using the popular Wordpress content management system and boasts a clean, minimalist black and white design by Citizen Journal. It provides players with a comprehensive overview of the current state of MMO games and gives recommendations to those who are looking for a list of which f2p titles are worth playing.

About TopFreeMMORPG.net
TopFreeMMORPG.net (http://topfreemmorpg.net) delivers free online MMORPG games reviews and opinion articles through its dedicated and skilled team of writers who provide insight, assistance, guides, game play reviews, videos, commentaries, and a friendly community. An innovator in the field of MMO games writing, TopFreeMMORPG.net is always looking for new and better ways to deliver content. 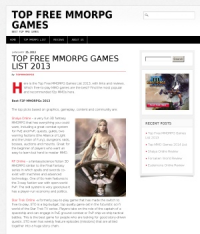