After graduating from the renowned Cornell Hotel School, Mr. Weinstein began his career as a real estate investment banker in New York City. With a family disposition toward entrepreneurship, however, Daniel moved to Boston in 2009 to join the family business.

But AEF’s green footprint doesn't stop there – The Green Geotextiles® is regularly sold as capillary fabric to the green roofing industry and as containment pads for the Oil and Gas industry. In the latter case, the The Green Geotextiles® promotes sustainability in both its composition and its application. The fabric's green color, beside obvious eco-connotations, increases work site safety by reducing ambient air temperatures by as much as 20 degrees.

Describing her "Manufacturing a Green Way" globe, Artist Ami said, “The bottom of the globe is a brick mosaic, representing a manufacturing building and the colorful floral mosaics represent the beauty of the environment when manufacturing goes green." Weinstein adds, "Not to mention the beauty of saving and adding new jobs here at home". American Engineered Fabrics, Inc, is dedicated to achieving both.

About AEF
Originally, A. Weinstein and Son was a wool trading and blending company. 100 years ago, before sustainability became popular, the company started a tradition of environmental responsibility by buying recycled wool and selling it to be processed into other manufactured products. Charles Weinstein in 1946 transformed the company into Trans American Spinning Mills, which broadened the company’s products through the purchase of recycled wool and synthetics to manufacture yarn and blankets. In 1981, Charles’ son, Reuben Weinstein, launched American Engineered Fabrics. In 1989 Reuben created Boom Environmental Products as the distribution arm of AEF. Boom Environmental adapted the geotextile materials manufactured by AEF into fiber-locked absorbents that were more durable and reusable than competing products. AEF, headed by Reuben’s son, Daniel, now continues its innovation in recycled non-woven textiles with The Green Geotextiles® portfolio of products made from 100% post consumer polyester. For more information on AEF and The Green Geotextiles visit http://www.the greengeotextiles.com, or http://www.boomenviro.com 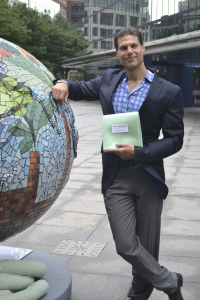