New Book Asks - What Does It Mean to Be "One Nation Under God"?

Written by Richard Capriola, ‘A Nation Under Judgment’ is a study of the United States of America’s social policies and culture from a Scriptural point of view.

This is the vital question asked by Richard Capriola in his upcoming book, ‘A Nation Under Judgment’ to be released in April of 2014.

Using his signature style – simple and effective – Capriola outlines our nation’s social policies and contrasts them with what he believes is God’s point of view from Scripture. Reviewing policies such as hunger, poverty, homelessness, the environment, and income inequality, Capriola challenges his readers to examine these issues and compare them to God’s perspective.

“What does it mean to be ‘one nation under God’” Capriola asks his readers. “Do the words have value only in times of national crisis?” He explains, “Our Founding Fathers believed the words were more than a political slogan. Have we strayed from their vision?”

Capriola explains the purpose of his book: “I want ‘A Nation Under Judgment’ to be a thought provoking journey that empowers readers to decide for themselves if our nation is moving away from God’s point of view when crafting social policies.”

‘A Nation Under Judgment’ defines wisdom as the ability to see things from God’s point of view and Capriola asks readers to examine if our nation is losing its wisdom and moving away from God.

“Our nation seems to be reaching a boiling point,” he says. “We appear restless and frustrated with a dysfunctional Congress that’s more interested in political bickering than solving the critical issues facing our nation.”

While he acknowledges that much of our dissatisfaction is due to the anemic economic recovery and high unemployment, he challenges readers to ask if the dissatisfaction might run deeper. “Could it be that a part of our unease is a deep feeling that our nation is moving away from God’s point of view?”

Early reviews for the book have been impressive. For example, Helen Randall, CEO of Christian Women Affiliate, said it’s “Well researched and Scripturally based.” She added: “A Nation Under Judgment seeks to be a catalyst for inspiring believers toward deeper biblical thought regarding social policy.”

Richard R. Blake, writing for Reader Views said, “A Nation Under Judgment is a clarion call to the dangers of national pride, indifference, exploitation, current trends, and of the danger of a nation moving away from God’s point of view.”

Dolores Liesner, a reviewer for Christian Women Affiliate, wrote: “Every legislator, and every believer, apologetic, preacher and evangelist needs this resource on their shelves.”

A Nation Under Judgment, published by Mill City Press, will be released in April 2014.

About Richard Capriola
Richard Capriola spent many years serving as a hospital chaplain. He completed four years of Clinical Pastoral Education in preparation for becoming a chaplain. In addition to his pastoral care experience he has led a church based outreach ministry and has served as a mental health counselor at both a regional mental health crisis center and a psychiatric hospital. 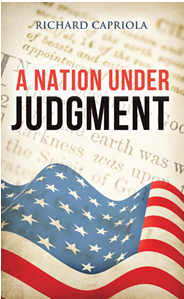