‘Discovery of Flight 19’ charts one former Marine’s real-life search and discovery of a TBM Avenger that went missing off the coast of Florida in 1945. During his exciting and perilous quest, author Jon F. Myhre also began questioning the existence of one of the world’s most curious mysteries – the Bermuda Triangle.

Sebastian, FL -- (SBWIRE) -- 11/12/2012 -- In December of 1945, five Navy Avenger bombers disappeared off the Florida coast – sparking the genesis of the Bermuda Triangle myth, one of the 20th century’s most ominous mysteries. The story of this tragic incident and one man’s search for his fellow airmen is told in a compelling new book – ‘Discovery of Flight 19: A 30-Year Search for the Lost Patrol in the Bermuda Triangle’.

The story focuses on author Jon F. Myhre, a former U.S. Marine and Army Pilot. Taking readers back to 1982, Myhre reveals the inspiration behind a quest that would consume him for the next three decades.

“I was on a layover in Nassau, in my post-military job as a corporate pilot. After reading a story about the incident in 1982, I was certain that I could locate where one of the planes ditched,” explains Myhre, who had an excellent familiarity with the Bahamas.

He continues, “So, I plotted the location using data from original radio transcripts and a little guesswork - as well by utilizing my aviation background. I calculated the ditching site to be thirty miles East of Cape Canaveral.”

Myhre sat on his calculation for four years, until the search commenced for the wreckage of the Challenger shuttle in 1986.

“During the search, a mini sub found an old airplane wreck and identified it as a DC-3. It was less than three miles from the coordinates I had plotted – and I was instantly dubious about their identification of the aircraft type,” he adds.

Following this landmark discovery, the book takes readers on a true adventure with Myhre and his Project 19 Inc. company, during their 1989 quest to identify the wreckage. Using side-scan sonar and co-ordinates supplied by NASA, an ROV positively identified the plane as an Avenger.

In 1991, the wreckage was salvaged and towed to Marineland in Florida. Everything was filmed by a team from television’s Unsolved Mysteries show.

“We carried out a lot of diligent work. However, following months of effort, we were unable to positively and concretely identify the remains. The Navy then took possession of the wreckage and subsequently sold it for scrap,” Myhre explains.

Now in book form, this captivating story has been featured in media around the world, with Myhre appearing on numerous national TV shows including Larry King Live, Inside Edition and on NBC.

‘Discovery of Flight 19: A 30-Year Search for the Lost Patrol in the Bermuda Triangle’, is available directly from the publisher: http://www.specialbooks.com

The book can also be purchased through Amazon: http://amzn.to/SHVgMo

For a wealth of background information on the book, including images and video of Myhre’s investigation, please visit: http://www.discoveryofflight19.com/

About Jon Myhre
Jon Myhre, originally from Chevy Chase, MD, retired as a Captain. The Army Master Aviator is divorced, has three children and five grandchildren. Jon is 70, retired, and lives in Sebastian, FL. 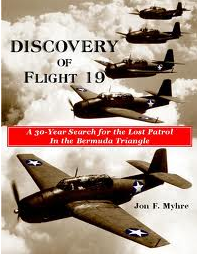