Believing that anyone can read or write music with ease, acclaimed Maestro, Barry Araújo Kolman, announces a new book which puts the gift of musical gusto in anyone’s hands.

Staunton, VA -- (SBWIRE) -- 09/25/2012 -- If you ask Maestro Barry Araújo Kolman, anyone can learn to read and write music. Proving his theory true is his latest book, ‘The Language of Music Revealed: A Real Easy Way for ANYONE to Learn to Read and Write Music’.

The book is designed for the everyday person, as well as the thousands of students who are sitting through college music fundamentals courses with glazed eyes. Offering a step-by-step and easy to follow process, Kolman takes the reader through a logical and hand-held journey into the fundamentals and practical application of music.

Unlike most music theory books, Kolman has worked hard to ensure that the book is fun, engaging and develops a deeper understanding and appreciation of the subject.

“The book will appeal to just about anyone that is currently involved in music, as well as to those who haven’t had their first foray due to the fear of music’s perceived difficulty,” says Kolman, who has toured the world extensively with orchestras including the St. Petersburg Philharmonic and the Buffalo Philharmonic Orchestras.

He continues, “Millions of people are experts in their musical field, having learned everything by ear. I also hope that my book will allow them to finally learn the fundamentals and concepts behind their passion, thus opening their minds to a new and exciting perspective.”

With initial book sales booming, Kolman is delighted to learn that hundreds of teachers have adopted his book as their standard student text. This is due to Kolman’s firm belief that, for people to enjoy music, they must move far beyond the theoretical fundamentals and into the practicalities.

“Just reading about music fundamentals won’t do much for you. You’ve got to jump in and begin to write music. At the end of each chapter, there are exercises for readers to see if they are catching on. Informational, occasionally entertaining icons guide them along as they learn to read and write music for work and pleasure,” he adds.

Critics praise the book for moving musical theory and practical application into a new and engaging realm. With all of its success, music’s reputation and image could be on the up and up.

“That is my ultimate goal, to prove that anyone has the capability to read and write their own music. The public may perceive it as a tough challenge. Though, in fact, it is ten times easier than learning a second language and almost anyone can be underway within ten days,” he concludes. Knowing more of how musicians make music can now be shared with everyone especially with those with no formal musical background. It is no longer a deep dark secret.

Looking into the future, Kolman has plans to release a Spanish language version of the book. Believing the Hispanic community to be deprived of rich musical resources, it is hoped that Kolman’s title will both educate and inspire the Spanish community to further enjoy the pleasures of melody.

The Language of Music Revealed: A Real Easy Way for ANYONE to Learn to Read and Write Music, published by Universal-Publishers, is available now.

At W&L, he teaches music fundamentals (a course he introduced to the curriculum), conducting, clarinet, and conducts the Shenandoah Symphony Orchestra. He has guest conducted throughout the world and has recorded several CDs which are commercially available.

Maestro Kolman graduated with high honors and received his Doctorate of Arts in Conducting along with the Dean's Citation for Excellence from the University of Northern Colorado. He lives with his wife Grace in Virginia, and has six children. 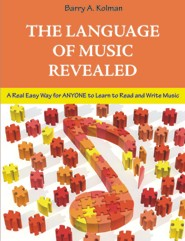