New York, NY -- (SBWIRE) -- 09/30/2014 -- The international best-selling author of THE LAUNDRYMEN pulls back the curtain on the digital currency craze to prove, as he says, “When it comes to bitcoin, what you see is not necessarily what you get.”

International best-selling investigative journalist Jeffrey Robinson spent more than a year trekking through “Planet-Bitcoin” to find a digital-something pretending to be a currency; that same digital-something pretending to be a commodity; a political movement that reeks of a delusional cult; and a technology – a unique peer-to-peer transfer system – that happens to be brilliant.

He deconstructs the great promises made by the “Faithful”: bitcoin will replace fiat; central bankers are trembling at the feet of this all encompassing digital currency; bitcoin is the perfect solution to the developing world’s unbanked and underbanked; bitcoin is a speeding freight train bearing down on the dollar’s dominance as the world’s primary currency; and bitcoin is wildly successful having gone so viral that it is viral cubed.

And he separates the myths from the naked truths, one by one.

He questions the get-rich-quick scheme of the Winklevoss twins;the rip-off bitcoin wannabe flogged by an off-the-reservation native American;and the illogic behind bitcoin ATMs – “For every bitcoin ATM in the world, there are 1680 condom machines in American gas station toilets.” He explains how companies who supposedly “accept” bitcoins don’t really want to have anything to do with them;then sings the praises of Satoshi’s blockchain technology and of bitcoin off-shootslike ColoredCoins and Ripple.

* How, punch for punch, the pretend-currency can’t stand toe-to-toe with the non-convertible Cuban peso.

* How the pretend-commodity is really just a casino chip for a loaded roulette wheel.

* That, despite the hype, there are fewer businesses worldwide who actually “accept” bitcoin than there are piano tuners in Canada.

* That, despite the hype, there are fewer people using bitcoins to buy goods and services than there are members enrolled in Kuwait Airways frequent flyer program.

* He insists that the “blockchain” technology behind bitcoin is brilliant and will absolutely change the world.

The book that the bitcoin “Faithful” do not want you to read, Jeffrey Robinson rips through the headlines, the hot air and the hysteria to prove without any doubt that, “When it comes to bitcoin, what you see is not necessary what you get.”

BitCon – The Naked Truth About Bitcoin
By Jeffrey Robinson
© 2014
An Exclusive eBook in Conjunction With
Amazon.Com And William Morris Endeavor
JUST PUBLISHED
146pp $3.99 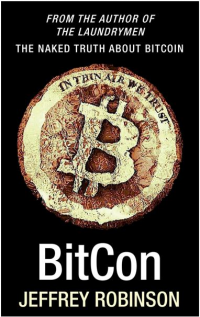