Rockville, MD -- (SBWIRE) -- 07/19/2012 -- Having become a victim of alleged Washington fraud, one U.S business owner exposes the real truth behind Federal Government contracts that were created ‘exclusively’ for small businesses.

“The Case: SBA Failure to Protect 8a Contractor Combating Fraud” is Joseph N. Cooper’s new book, discussing the serious problem of federal government contracts designated for small and women or minority-owned businesses being fraudulently given away to large, multi-million dollar firms.

It is based on the story of the author’s business, J. Cooper & Associates, a small business that participated in the U.S. Small Business Administration 8(a) program.

His business had acquired an $8-million contract with the former Immigration and Naturalization Service only to see it evaporate when a federal contracting officer rescinded the deal and gave it away to alleged friends who ran a large corporation. This corporation was neither small nor wholly owned by women or minorities.

He continues, “Unlike other small-business owners who witnessed government malfeasance, I took my case to two courts over a 15-year period to fight for justice.”

His is the first and only case of its type to appear in court regarding fraud in this particular government program. “The Case” is a book that will inform small-business owners and entrepreneurs planning to launch a business of their own just how easy it is for the federal government to destroy a small firm.

Cooper’s blistering exposé will give insight into the significant legal hurdles his business had to clear in order to obtain justice. It shows explicitly how government contracting offices and courts ignored long-standing laws and existing regulations.

The reader will also get the chance to view the entire legal argument made before the U.S. Federal Claims Court as well as understand why small businesses have lost over $35 billion in Federal Small Business contracts to big businesses.

“Essentially, my story talks about corruption in government contracting and its impact on small businesses. Government and Congress do nothing to address the problem and the book will explain how big multi-million dollar contractors lie by saying that they are small businesses to acquire contracts they are not eligible for,” Cooper adds.

In short, “The Case” is an eye-opening book that will shock small business owners and educate anyone concerned about government fraud in contracting offices.

The book can be purchased from Amazon.com, Amazon Europe, your eStore and Kindle.

Through expanded distribution, the book can be purchased through retail stores such as Barnes & Noble. If ordering via this format, be sure to include book’s ISBN number (1470050595) as well as the author’s full name and the book’s title.

About Joseph N. Cooper
Joseph N. Cooper has worked inside four United States presidential administrations. During the two Reagan administrations, he was the highest-ranking black Republican appointee. He has served as national director of the Office of Federal Contract Compliance Programs in the U.S. Department of Labor and as an assistant director in the Minority Business Development Agency. As part of his career, he has traveled extensively throughout Europe, Africa and Asia. 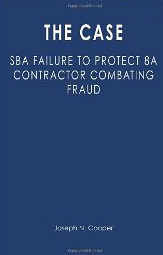