Author Stephen Palmer is a mission to inspire Americans who are concerned with the state of their country to replace their anger at government with positive and wise action. His latest book will resonate deeply with independent thinking patriots who love their country, the Constitution, and their freedom. With America in steep decline, ‘Uncommon Sense: A Common Citizen's Guide to Rebuilding America’ provides clear, realistic, and practical solutions that every American citizen can apply.

St. George, UT -- (SBWIRE) -- 07/08/2013 -- Stephen Palmer’s message is simple yet vital: The energy spent getting angry at Washington and its politicians is both misspent and misguided. Common citizens are responsible for their own freedom and how their government functions. As he puts it, “We the People are the problem. And We the People are the solution.”

His counterintuitive, non-partisan solutions are revealed in Uncommon Sense: A Common Citizen's Guide to Rebuilding America. In this collection of 43 essays, Stephen Palmer challenges freedom-lovers to do more than march on Washington -- he challenges them to reform their own hearts.

“Those who expect to reap the blessings of freedom must, like men, undergo the fatigue of supporting it.” –Thomas Paine

In 1776, Thomas Paine’s Common Sense showered sparks on the tinder of revolution. With the signing of the Declaration of Independence, Americans formally claimed their rights, and that tinder exploded into a new age for mankind.

But more than 200 years later, the flames of freedom are dying. We cry that Washington has failed us, but that is not where the blame lies.

In an age of blame, this is uncommon sense. And it’s precisely what America needs to rekindle her light.

As the author explains, every American citizen has a responsibility to protect freedom.

“American citizens are up in arms over government abuses. They're fed up with the encroachment of the federal government, overspending, the national debt, immigration, corruption and a broken political system. But the energy spent getting angry at Washington politicians is misspent and misguided,” says Palmer.

He continues, “We the People ARE the government. We get the government that we deserve. It is the role of common citizens to keep the government in check and to protect and preserve freedom. Our loss of freedom is our fault, and it's our duty to get it back.”

Early reviews for the book have been overwhelmingly positive. For example, Oliver DeMille commented, “Uncommon Sense is earnest, idealistic, counter-intuitive and vital; a Tea Party for the soul. At times it had my heart racing, and at times moved me to tears. This empowering work is elegant in its simplicity and profound in its potential to move the hearts and minds of our people to own their role as the Overseers of Freedom and to advance the cause of liberty."

For more information, download a free sample of the book here: http://bit.ly/1cA5k0C

About the Author: Stephen Palmer
Stephen Palmer is the founder of Life Manifestos, co-founder of the Center for Social Leadership, and the author of Uncommon Sense: A Common Citizen's Guide to Rebuilding America.

A liberal arts graduate and political independent, Stephen is dedicated to moving the cause of liberty and protecting and preserving freedom for future generations. A dedicated learner, he loves studying political philosophy, economics, history, personal finance, entrepreneurship, religion and spirituality, family, education and culture.

Stephen and his wife are raising their four children in southern Utah. When he's not writing or spending time with his family, you'll find him reading, canyoneering in Zion National Park, gardening, or playing basketball. 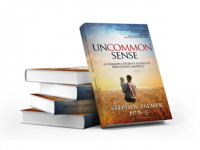