Showcasing over one hundred previously unpublished color photographs from Ali’s infamous victory over Leon Spinks, ‘The Final Victory’ ties together all that made Ali ‘The Greatest’. Shot and compiled by award-winning photographer Paul Leo Faso, this ground-breaking book defines the bold achievement and unshakable respect garnered by history’s greatest sporting hero.

Ashburn, VA -- (SBWIRE) -- 12/05/2013 -- When photographer Paul Leo Faso arrived at the New Orleans Superdome on September 15th 1978, seventy thousand fans and ninety million global television viewers joined him to witness Muhammed Ali attempt to reclaim the Heavyweight Championship of the World for the third time. However, Faso wasn’t aware that he was about to photograph Ali’s final victory; a fight that would go down in history as one of sport’s finest hours.

Thirty five years after the final punch was swung, Faso has re-mastered and compiled over one hundred previously unpublished photographs taken that hour. ‘The Final Victory: A Tribute to The 3rd Muhammad Ali Championship Fight’, available in electronic eBook, captures the moment Ali turned from the present’s most loved sportsman to unforgettable global icon.

Faso has put together over 100 photographs of the historic final victory of boxing legend MUHAMMAD ALI taken September 15,1978, at the Superdome In New Orleans.

The photographs document the moments before, during and after the fight and include images of Muhammad Ali, Leon Spinks, along with ABC Wide World Of Sports announcers Howard Cosell, Frank Gifford and Chris Shenkel.

The Final Victory defines for the historical record, the incredible sporting achievement of Muhammad Ali in regaining for an unprecedented 3rd time, the heavyweight championship belt unseating the former heavyweight champion Leon Spinks, who had just taken it away from Ali, 8 months prior to this comeback fight.

The author feels privileged to be adding to Ali’s unwavering grip over the literary world.

“Muhammad Ali is a publishing wonder in and of himself. Over seventy thousand books worldwide, have been written about his life and career, with mine acting as a clarifying agent among the enormous footprint left by this incomparable boxing champion. My hope is that the photographs and comments will stop the clock, just like Ali stopped the world to reclaim his title during this pivotal hour,” says Faso.

Continuing, “This event, as Ali’s life itself, has spawned thousands of books. Mine focuses solely on this one night – putting readers in my shoes as I stood beside the ring. It captures the pinnacle moment where one thirty-six year old boxer, became a living legend.”

With the holidays approaching and the book in high demand, interested readers are urged to purchase their copies as soon as possible.

‘The Final Victory: A Tribute to The 3rd Muhammad Ali Championship Fight’ is available now in eBook and soon to be released in bound Coffee Table format in 2014.

About the Author
Paul received his Bachelor of Arts degree from the State University of New York at Buffalo after serving in the U.S. Army and with 82nd Airborne Division.

During his career, he has been active in producing, promoting, marketing, and selling photographic art. In the past four decades, he has placed his works into government and corporate environments throughout the nation.

In 1986, his photographs of the Statue of Liberty were selected as “The Official Limited Edition” for the Centennial.

Paul has lived in Atlanta and the Palm Beach area for the last 40 years. 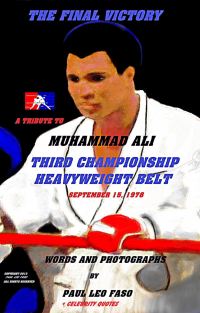 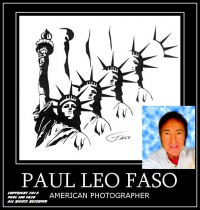