Climbing to the top of the career ladder is the dream of most Technologists. However, in a job climate that changes as fast as technology itself, figuring out the route is daunting at best. In his latest book, industry expert John Schneider shares his hints and tips to rise to the top.

Jamestown, OH -- (SBWIRE) -- 11/09/2012 -- If you ask John Schneider, author of ‘A Technologist’s Guide to Career Advancement’, his book simply had to be written. Having spent two decades rising from a C Programmer to the VP of a Fortune 100 Software Development Company, Schneider understands the dreams and aspirations of technologists everywhere. Now, for the first time, he shares his advice and techniques in a compelling new book.

‘The single goal of this book is to give technologists the advice and techniques that will lead directly to advancement in their IT career,” says Schneider, who has mentored hundreds of technologists spanning a myriad of industries.

He continues, “It can be extremely daunting to do things like ask for a raise or request the promotion that you rightly deserve. I have been there myself. Having figured out the most efficient route to the top – I have now decided to share it with the industry at large.”

In fact, Schneider aggressively studied the technology industry during his time as an executive with a major corporation. By documenting the attitudes, techniques and processes that led to his employees’ promotions, a clear framework for success was devised.

“No book or other guide that exists that describes the techniques that technologists need to move up in their career. It will help many people in the technology field, both industry veterans and newcomers, figure out how to become excellent at what they do, and how to get a raise and promotion,” Schneider adds.

‘A Technologist’s Guide to Career Advancement’, published by CreateSpace, is available now.

About the Author: John Schneider
Mr. Schneider received his Bachelor of Science degree in Computer Science from Iowa State University, and his MBA from Drake University.

His first job out of college was writing software in C on OS/2. Even back then that was a bit of a rarity, though it helped establish his strong technical foundation.

Eventually, Mr. Schneider worked his way up from being a programmer to architect to technical manager. Along the way, he developed and designed some of the most complex ecommerce systems used today, as well as worked on some of the largest database systems in the world. He also authored and holds United States Patent 7,228,371 which describes a system and method for automatically determining when computer workstations should be upgraded or replaced.

As his career progressed, Mr. Schneider earned the position of Vice President of Software Development at one of the world's most respected Fortune 100 companies. In that role, he has had the great opportunity to hire and mentor many technologists across many industries.

Over time, he has developed various techniques and processess that technologists can use to perform better at work, and get promoted along the way.

Mr. Schneider is married with three kids, and resides in Southwest Ohio. 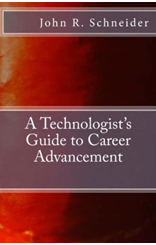