When Alisha Mitchell walked into the office on her first day of work, she was excited about what lay ahead. However, when a new manager was hired one week later, Alisha and her co-workers were thrown into a living nightmare; an experience that left Alisha with an unbelievable story to tell!

New York, NY -- (SBWIRE) -- 07/31/2012 -- It’s not rare for new employment to eventually become just another job. However, for New York’s Alisha Mitchell, her new office quickly became a place of suspicion, lies and hidden agendas. It wouldn’t take long for everyone to realize that the new manager was “off the leash,” and on a rampage!

Barely surviving the ordeal, Alisha decided that she had to tell what happened to her and her co-workers. Now, the world is getting a peek into Alisha’s pandemonium in her new book, Off the Leash: Eighty-Seven Days of Office Terror.

Off the Leash: Eighty-Seven Days of Office Terror is a humorous and dramatic true story about a group of workers who are brought together under curious circumstances. When a strange new manager is hired, things quickly go from bad to worse. Soon, a sinister agenda begins to reveal itself and each person must decide what to do and whom to trust, before it's too late!

As Alisha explains, she just couldn’t keep the story to herself.

“When the nightmare was finally over, I knew that I couldn’t keep it a secret. Most of us can relate to having an awful boss or co-worker, but this experience shows you just how crazy things can really get!”

Continuing, “How will the characters react to the strange new boss, or to their co-workers being ‘picked off’ one by one? How will each person handle the growing suspicion and pressure? And what would YOU do if you suddenly found yourself in that situation?”

This true story has been received into the literary world with critical acclaim, garnering consistent five-star reviews since its launch.

“No matter who you are, you will definitely be entertained from the opening page to the very surprising end!” Alisha concludes.

Off the Leash: Eighty-Seven Days of Office Terror is available now from both Lulu and Amazon.

For more information, please visit Alisha’s official website. Visitors will find exciting information, contests and even a sneak peek of chapter one!

Those who’d rather see the action on the big screen can head over to YouTube for the book’s official video trailer.

About the Author: Alisha Mitchell
Alisha Mitchell is a NYC-born author and illustrator. Her love of reading and writing were evident from early on, when she wrote and fully illustrated a book at the age of six years old. It was entitled, “Love Can Kill.” It was about identical-twin females with opposite personalities, and it involved lies, cheating, and murder. Alisha's dad was mildly impressed. Her mom was deeply concerned. Alisha's only copy of the book mysteriously disappeared one night, never to be seen again.

In grade school, Alisha struggled with math but excelled in Reading and English classes. She was selected to participate in an elevated literature and reading program, which matched three students with tenured English teachers. During her individual sessions, Alisha was introduced to novels that some kids wouldn't read until many years later. She vividly remembers studying Thank You, Ma’am, by Langston Hughes, and challenging her emotions when it came to the actions of the main characters. Alisha also won a district-wide competition which involved writing an alternate ending to the story.

Working in Human Resources for many years has given Alisha an inside perspective on office politics, power struggles, and a variety of humorous situations. Alisha has taken these experiences and incorporated the basic truths and emotions into her writings. 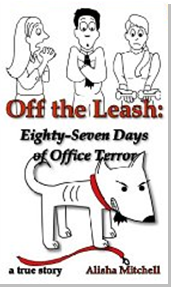