Having suffered a near-fatal battle with Bipolar Disorder, Blake LeVine set up his own support website, ‘Will Listen’. Continuing his mission to help others struggling with the condition, LeVine today announces the launch of his new book.

Los Angeles, CA -- (SBWIRE) -- 09/10/2012 -- It’s the dream of every author; a celebrity endorsement and a huge dose of credibility. For Blake LeVine, his most recent accolade inspires him to continue helping others with mental health struggles.

LeVine, a social worker, is no stranger to the perils of struggle. Following a near-fatal battle with Bipolar Disorder during his teenage years, five hospitalizations later, he knew he just had to help others.

“Millions of people are struggling with emotional and financial issues due to the stress of the modern world. To help those in need, I set up a unique social community of health, called Will Listen,” LeVine explains.

He continues, “The site is a free online hub for people to discuss coping strategies for Bipolar, Schizophrenia, Depression, Cancer, Addictions, AIDS, Rape and financial issues. We currently have a heap of members from around the world who treat the site as a vital lifeline.”

Following the slow re-building of his life and the completion of a Master’s degree, LeVine now helps thousands suffering from the chronic feeling of loneliness that many health conditions bring, through free emotional support.

“When I was diagnosed I was so upset and alone. I was frightened to tell my friends and felt like an outcast. I always wished there was somewhere I could go to talk to others facing issues,” he adds.

LeVine is currently scheduling interviews to discuss both his book and his website. Interested parties are asked to call (213) 304-9555 or email blakelevineevents@gmail.com.

More information on Beating Bipolar can be found at: http://www.amazon.com/Beating-Bipolar-Therapist-Tackled-Illness/dp/1401939511

About the Author: Blake LeVine
Blake LeVine is a social worker and life coach dedicated to bettering lives. An expert on helping people with bipolar disorder and improving emotional health, Blake is also the only social worker to personally meet the Dalai Lama, Nelson Mandela, Mother Teresa, Princess Diana, Michael Jackson, and more than 5,000 other notable people. Blake has appeared on Dr. Phil, CNN, ABC, Fox, Oprah.com, and over 500 radio programs. He has worked with the homeless in New York City, foster-care children, and bipolar families, and has been in private practice for several years. Blake holds a master’s degree in social work from Adelphi University. 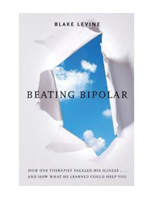