Kids and parents will be delighted by Bear Dog Dog Bear by Tracy Falbe that tells the amusing story of a family adopting a bear cub by mistake when they meant to get a German Shepherd puppy.

Battle Creek, MI -- (SBWIRE) -- 04/25/2014 -- With an upcoming release date of May 8th, parents and children can pre-order Bear Dog Dog Bear by Tracy Falbe in the Barnes & Noble Nook store. The $2.99 ebook is a chapter book of about 12,000 words and introduces readers to the family of ten-year-old Daniel Wood who is on his way to adopt a German Shepherd puppy.

About Bear Dog Dog Bear
Daniel Wood and his family are getting a puppy. A black German Shepherd puppy to be precise. His dad already picked her out on the internet, and they are on the road to the breeder’s house at the end of a long creepy country road into the woods. It looks like a woods where bears might live, but no one is thinking about that when disaster strikes the puppy barn.

This cheerful chapter book brings the wild into suburban Cherry Park and sets a puppy loose in the countryside. Daniel has no idea what is happening until the truth is broadcast on the evening news and a video of his dad wrestling a bear cub hits YouTube.

Bear Dog Dog Bear is Falbe’s first foray into children’s writing, but she is an accomplished novelist writing since 1997. She is the author of 9 fantasy novels aimed toward older teens and adults, but now that she is the mother of young children she bowed to pressure to write a children’s book.

“Last year I gave a talk about writing to third graders at my son’s school and everyone wanted me to write a children’s book,” Falbe said. “I got the idea for Bear Dog Dog Bear because we have a young black German Shepherd and I often joked that she was a bear cub instead of a puppy.”

In addition to the Nook store, Bear Dog Dog Bear will soon be releasing in Kindle stores and at iBooks, Kobo, and Smashwords. To receive information about availability and the release of the paperback, people can join the readers’ list at Falbe Publishing. 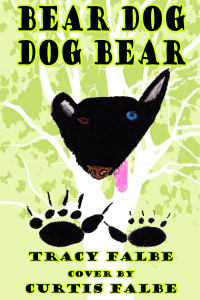