‘The Worldly Adventures of Nicolaas’ is the ultimate young boy’s journey of adventure, freedom and discovery. Penned by Illinois author, Betty Davis, Nicolaas and his unusual escapades are capturing the hearts and minds of people across the nation.

McHenry, IL -- (SBWIRE) -- 07/30/2012 -- For the main character of Betty Davis’ new book, life is anything but ordinary. In fact, the life of young Nicolaas is packed with journeys into the historical past, moments of page-gripping danger and even adventures into his own football dreams.

The Worldly Adventures of Nicolaas focuses on one boy’s departure from his home town of Eden Prairie, Minnesota for his family’s new life in Leiden, Holland. After embarking on a cruise ship for their transatlantic trip, the vessel stops in many exciting ports where a myriad of surprising adventures await.

Including shipwrecks in the Caribbean Sea and face-to-face meetings with treacherous storms in Madeira, Nicolaas and his imagination bare it all in the name of fun and discovery.

The boy’s love of football plays a vital centre-stage role. For example, after finding some ancient sports memorabilia, Nicolaas and his cousin touch a football that was once signed by Walter Payton. They are both instantly transported to a Minnesotan Viking football stadium.

In another adventure, while at Graveensteen Castle in Ghent, Nicolaas touches a suit of armour and is whisked to a world where a medieval battle is taking place between peasants and aristocracy. Finding himself right in the middle of the action, Nicollas narrowly missed the certain death of a high-speed arrow. After returning to the castle, his Mom reminds him that he has been by her side the entire time.

However, Nicolaas puts his hand into his pocket and cuts his finger on arrowhead which has somehow got lodged in his clothing. He also holds the utmost importance to his cap which bears Eden Prairie football motif.

With all of the thrills and spills of a classic young boy’s adventure book, author Betty Davis makes it clear that her book has a very important message.

“My book is unique because it is a story about friendship as well as his love for football. It is a story of new beginnings,” she says.

Continuing, “With today's mobile society children often must leave their home and friends that are dear to them. Moving to a new home is scary but moving to a new country is even more uncomfortable for a 10 year old. Nicolaas is an avid reader and loves to write. The ending of the story is the best part while Nicolaas said reading is the most amazing adventure of all.”

Davis was inspired to write the book following a request made by her late Mother. With over a decade of experience teaching children between the ages of four and twelve to read, her experience equipped her with all of the necessary skills to write a timeless classic.

“This audience will be amazed by the adventures that Nicolaas has on his way to Leiden Holland. As Nicolaas travels to different countries he meets a new challenge and displays how he overcomes the challenges he faces. Each chapter is filled with adventures and interesting facts of each country and this is the first in the series,” she concludes.

For more information on The Worldly Adventures of Nicolaas, please visit: http://www.facebook.com/Bettydavis52

The Worldly Adventures of Nicholaas has a lesson plan that accompanies the book for an additional fee.

About the Author: Betty Davis
For the past eleven years Betty Davis has been teaching young children ages 4-12 how to read or become better readers. This allows them to become confident, passionate readers.

Davis has developed her own program to teach children of all learning styles to better assist them in learning to read while having fun. She has noticed that the children of today may never get the opportunity to experience what it would be like to travel to countries in Europe or around the world.

So, she was inspired to write about a ten-year old boy who left his home in Eden Prairie Minnesota and travel to Leiden Holland. 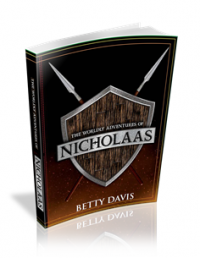