International award winning author, John Truman Wolfe, has launched a new investigative magazine to the Apple Newsstand entitled THE HARD TRUTH. The magazine is also available as a regular PDF download at http://thehardtruthmag.com.

Wolfe is the creator of the award-winning Tom McKenna private eye series and the non-fiction, Amazon best-seller, Crisis by Design The Untold Story of the Global Financial Coup.

The newsstand, created by Apple in the Fall of 2011, now carries thousands of titles that are available as digital magazine Apps to the 170 million iPad users.

THE HARD TRUTH takes its title from a quote by George Orwell, the internationally heralded twentieth century author of 1984 and Animal Farm:

"In a time of universal deceit, telling the truth is a revolutionary act."

"The deceit may not yet be universal, but it is rapidly moving in that direction," Wolfe said. "Politicians lie with impunity today while corporate abuse and malfeasance are subject to ‘cost of doing business' fines and those responsible bury the truth in a hurricane of PR spin."

The magazine is available now for both iPad users as an App on Apple Newsstand or as a PDF download from the magazine's Website.

Other stories include an expose of those behind the Global Financial Crisis and what it portends for investors and the future the of U.S. economy, the fight against the expanding use of GMOs and the historical background to the fourth amendment, “the right of the people to be secure in their persons, houses, papers, and effects, against unreasonable searches and seizures, shall not be violated...”

"If telling the truth is a revolutionary act, color us Minute Men," said Wolfe. 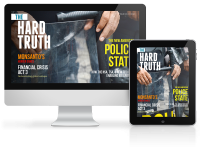