The first volume of Sam Medina’s new ‘Darkfell: The Fetters of Wizardry’ series is poised by critics to sit on bookshelves next to coveted fantasy classics such as Lord of the Rings and The Chronicles of Narnia. Depicting a world devastated by a war between magic and technology, readers around the world are bracing themselves for a journey laden with magic, science and meddling dragons.

Toronto, Ontario -- (SBWIRE) -- 07/08/2013 -- Award-winning American writer, Sam Medina, is renowned around the world as the creator of two runaway hit webcomics; ‘Jake the Evil Hare’ and ‘Darkfell: The Fetters of Wizardry’. With over 60,000 online fans gripped to his work, the announcement of his latest novel has been both eagerly awaited and long overdue.

‘Katarina the Dragonslayer and the Foebreaker's Curse’, volume one of the ‘Darkfell: The Fetters of Wizardry’ series, started life as a character treatment for another novel. However, as Medina wrote, the history of Katarina’s world began to unfold and he felt compelled to follow her journey and develop a dedicated novel.
Synopsis:

A half-elven slave girl finds a pair of ancient swords in a cave and unlocks a destiny that will change the course of a struggle between magic and technology spanning eons and worlds.

Living in a world scarred by an ancient conflict between magic and technology, Katarina is a half-elven slave girl determined to find freedom and adventure. When she takes a pair of ancient swords from a cave, she is blamed for her master's death. Her frantic attempt to escape torture and death at the hands of a vengeful mob forces her to risk the nameless terrors of the King's Road, which is said to have been cursed because of a Foebreaker, a living machine of war that laid waste to the Southlands long ago. Katarina's troubles have only just begun, however, because a disease of raging madness has begun to spread among the dragons, and someone is following her...

As the author explains, his novel was wide appeal.
“It’s suitable for all ages; written for anyone who enjoys epic fantasy or science fiction,” says Medina.

Continuing, “I spent a good deal of time researching ancient cultures to ensure that the narrative’s mythology closely reflects real-world legend and lore, while trying to give it a voice of its own. The result, I think, is a sort of 'magic realism' that will allow readers to lose themselves in Katarina's world.”

"Medina has clearly spent a lot of time developing his mythology, and it really shows... seems to have borrowed the best of Tolkien--the imagination, the distinctive voice, the journey--and given it his own twist while leaving behind the old master's lengthy, not-so-fun exposition. Also, this may come as sacrilege to some and is mostly likely due to my 21st century sensibilities, I believe Medina is more appealing than Tolkien in his pacing and dialogue... For fans of epic fantasies, Katarina is a welcome return to the kind of fun heroic adventures we all love,” says Zigzag Timeline.

Author Matt Posner was equally as impressed, adding, "Echoes of Tolkien fill a book for the modern reader. 5 stars!"

With the book’s popularity expected to soar, interested readers are urged to purchase their copies as soon as possible.

‘Katarina the Dragonslayer and the Foebreaker's Curse’ is available now:

About Sam Medina
Sam Medina is an award-winning artist and best-selling author as well as a seasoned sales professional born in Jersey City, NJ. After earning a BA in History at Princeton, he went on to start an art and design business under the name of ‘Basement Studios’ in 1997 while working in sales. In time he began to develop marketing plans for some of his art and design clients, and by 2004, he was specializing in executive consulting and sales education with clients throughout the US and Canada.

He has developed strategies for companies in the financial, IT, real estate, security, personal care products, and comics publishing industries, and is a highly sought-after conference speaker who has spoken on leadership, sales, and effective communication at corporate events, community groups, and universities. 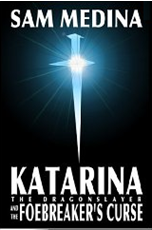