Hong Kong, China -- (SBWIRE) -- 03/07/2017 -- A new revolutionary platform for the "Cautious" online daters and an innovative take on the good-ol online dating, Meetsy dating app is reimagining what it is like to safely date online and avoid dating a catfish. Over the past few months, the developers of the new and upcoming dating app Meetsy have been researching, refining and designing something that will re-define how people date online and meet the right one.

The Meetsy app has been designed to offer its members a safe and private online environment, which puts emphasis on legitimate users, with actual, unedited photos and safeguarding user information and data more than anything. Over the past decade, online dating has emerged and has continually evolved into one of the easiest and fastest growing methods of meeting potential romantic partners. Although it has its fair share of both pros and cons, a few online dating command the lion's share of the online dating industry and the developers of Meetsy are ready to shake things up with their innovative concepts.

"With Meetsy, we intend to revolutionize this industry, introducing people to a slew of new features based on usability and convenience. Dating apps are full of catfish, fake photos, and personas of ideal ones. Our project is to create the most truthful dating app available on the market." – Meetsy spokesperson.

Meetsy has shared the concept behind their app with the online crowd on crowdfunding platform Kickstarter because the app is yet to become a reality and Meetsy is letting online crowd determine the app's fate. The recently launched crowdfunding campaign has an HK$ 240,000 funding goal with 27 days left before the campaign ends. A variety of different specially designed rewards and perks are being offered to reward those brave enough to support the campaign in these early stages.

For more information and to support the project, please visit:
https://www.kickstarter.com/projects/985433618/meetsy-never-dating-a-catfish-again

About Meetsy
Meetsy is a dating app by a team of software engineers from different fields, who extremely love new technology and the hybrid environment. Their ultimate goal is to create and develop something new that can improve life and the world. 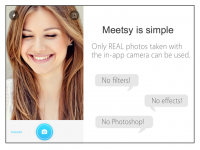