Beaverton, OR -- (SBWIRE) -- 10/30/2011 -- The new Website Besttabletreviewshq.com explains why the Kindle Fire tablet from Amazon is poised to take the lead in the tablet market. The Kindle Fire review Website is the number one source for information and reviews on tablet computers.

As PC and laptop sales decline, tablet computers are gaining popularity. Consequently, manufacturers are responding by better tailoring tablets to consumer needs. The emphasis is now on technologically advanced and versatile tablets that focus on content as the main income generator while making the device itself available at an inexpensive price point relative to its competitors.

According to besttabletreviewshq.com, the Amazon Kindle Fire is the device poised to lead the pack into 2012. As the first color tablet offered by Amazon.com the Kindle Fire has multi-uses such as reading kindle books, playing music, streaming movies and access to the Amazon Appstore. “The Kindle Fire doesn’t even begin shipping until November 19th, of this year and pre orders have already topped 95,000 units according to several sources,” said the Websites representative. Not only does it look like it will be the item for the holidays, but will quickly dominate the tablet market overall.”

The new Kindle Fire review Website is the definitive source for a number of tablet reviews and articles to educate owners and potential owners about the Kindle Fire. “We cover everything from the operating system and competitor comparisons to providing links where readers can buy Kindle Fire for just $199,” said the Website representative.

Among its many features are a seven-inch color touch screen that can deliver up to 16 million colors and in-plane switching (IPS) technology for an extra-wide viewing angle. The exceptionally tough “gorilla glass” protects the display from scratches and is chemically strengthened to be 20 times stiffer than standard plastic.

The tablet computer is run by Android 2.3 Gingerbread, which allows a wide collection of stable Android game titles to be installed in addition to working product apps, document support and the “free app a day” feature of the Amazon Appstore. The device’s dual-core and Amazon’s cloud storage allows it to run multiple applications simultaneously as it frees the device from holding all of the apps, thereby eliminating lag time. Amazon has also handpicked the current 10,000 best apps to provide a much better user experience for those who own the Kindle Fire tablet. For more information, please visit http://besttabletreviewshq.com 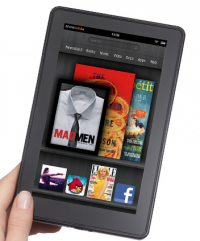