‘Me and Us: Special Memories of a North Carolina Country Girl’ is the richly told tale of the life of Faye L. Gardner, a woman who suffered the agonies of typhoid fever as a child, and survived a painful bone infection that became her salvation. Flipping the notion on its head of what it means to have a “handicap,” Gardner tells her story with wit, grace and a talent for entertaining the reader.

In her new memoir, “Me and Us: Special Memories of a North Carolina Country Girl,” Gardner takes the reader on a journey that begins with her birth in a small house deep in the heart of Pender County, North Carolina. Times were difficult, as the world still reeled from the Great Depression and the Second World War, and Gardner’s family increased by four children in only five years. As Gardner fell ill as a child, before she was five years old, first with typhoid fever and later with osteomyelitis – which was a bone infection in her left arm – it seemed that the family would have every right to complain.

“Thankfully, we didn’t!” says Gardner, remembering. “We were a happy family, and we had a ‘make-do’ attitude, which is so important when you’re struggling. We still found time to laugh and to play. That attitude has stayed with me the rest of my life. Even with such a debilitating infection in my arm, I still felt grateful for the gifts I had been given.”

It was Gardner’s “gift of pain,” that eventually led her to college and, consequently, to the love of her life – her husband. Warm, nostalgic and emotional, “Me and Us” is the beautifully told story of Gardner’s unique voyage through her pain to find the other side.

"This is my story. It's the unvarnished truth about my cultural heritage and it starts in the countryside of southeastern North Carolina. When I married my husband, he was an officer in the United States Air Force;, and we spent our first 15 months together in Casablanca, which proved a wonderful opportunity to explore other cultures." Faye Lanier Gardner grew up on a small farm near Burgaw in Pender County, North Carolina, about 30 miles from the well-known beaches. This book is about her many unusual experiences growing up. Because of the bone infection of the left arm, which was very painful and debilitating, this pain became her gain. As a high school senior, she was eligible for a full college scholarship because of her "handicap." Faye met her husband-to-be during her first month of college. They married almost four years later. She received her BS in business education and English education from East Carolina University, and her M.Ed. in occupational education from North Carolina State University, Raleigh. She taught at Campbell University, Forsyth County Schools, Hardbarger Business College, and Wake County Public Schools. She also performed secretarial duties on Nouasseur Air Depot near Casablanca, North Africa, and at a law office in Winston Salem.

Since its release, the book has received glowing reviews from readers.

“I believe this book would appeal to any age adult readers and leave the reader with a warm feeling. The book pulls the reader into it,” wrote Jan Jencomb

Saying, “I don’t know when I’ve had a better time reading a book”, J. Stella Bock wrote: “Faye has a way of drawing you in and making you feel part of her experiences growing up. For instance: Now I know how to make a goose down feather pillows! And all about Venus fly traps-these have always fascinated me, but I never knew that much about them. Faye's fixed that. She's a wonderful writer and if I had any complaint, it would be this: Faye, why wasn't the book longer? I look forward to the sequel-which will soon be forthcoming, I hope! Buy it-I promise, you won't be disappointed.”

As Gardner explains, writing her memoirs made her remember how hard she fought for what she has, and how she has always felt a guiding hand on her shoulder.

“My guardian angels have always been a real asset to me and to my family and friends. My story shows what one can do if he/she really wants to and accepts God's guidance,” says the author.

“I knew I didn't want to spend my entire life eking out a living on a small farm. I wanted more, and I was willing to work for a different life. I enjoyed my "growing up" years, but I knew I didn't want to stay at that point. I always envisioned my being the one in front of a class, and I worked hard to realize that goal. I’ve had readers tell me how inspired they’ve been by that, and there is no greater compliment.”

“Me and Us: Special Memories of a North Carolina Country Girl” is available now from Amazon: http://amzn.to/1gm7lk1, www Barnes and Noble.com, and www.Quail Ridge Books and Music.com in Raleigh, NC.

About the Author: Faye L. Gardner
Faye L. Gardner is a retired high school teacher. This is her second book. Her next will be a sequel to “Me and Us.” She lives in Raleigh, North Carolina, with her husband, Robert, an orange tabby named Mr. Ben, and a very protective mini-dachshund named Heidi. They have two children, two granddaughters, and two great-grandsons. Publisher's website: http://sbpra.com/FayeLGardner 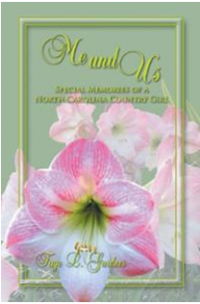