Written by Seng Ty, ‘The Years of Zero: Coming of Age Under the Khmer Rouge’ is a searing account of Ty’s experiences during the infamous ‘Cambodian Genocide’ and life in a brutal labor camp. Ripped from his family’s arms and left alone to face depravity, starvation and violence, Ty nonetheless survived. He would be the only one of his family who did. Now, for the first time, he tells his story in a haunting memoir that cuts to the true heart of what it means to be a human being and tells a tale of unspeakable cruelty, incredible courage, and the healing power of forgiveness.

Communist insurgents known as the Khmer Rouge finally did what so many families feared they would, and seized control of Cambodia from a government that had previously been supported by the United States.

In his new memoir, ‘The Years of Zero: Coming of Age Under the Khmer Rouge’ Seng Ty offers readers a glimpse of terror through the eyes of a seven-year-old boy. Often called ‘a prodigy in the art of survival’, Ty was thrust from a comfortable, loving home and sent to an agricultural labor camp where he watched his family starve and his mother and father die.

Soon, he was the youngest of eleven siblings to survived.

The Years of Zero—Coming of Age Under the Khmer Rouge is a survivor’s account of the Cambodian genocide carried out by Pol Pot’s sadistic and terrifying Khmer Rouge regime in the late 1970s. It follows the author, Seng Ty, from the age of seven as he is plucked from his comfortable, middle-class home in a Phnom Penh suburb, marched along a blistering, black strip of highway into the jungle, and thrust headlong into the unspeakable barbarities of an agricultural labor camp.

Seng’s mother was worked to death while his siblings succumbed to starvation. His father was killed and his oldest brother was brought back from France and tortured in the secret prison of Tuol Sleng. His family’s only survivor and a mere child, Seng was forced to fend for himself, navigating the brainwashing campaigns and random depravities of the Khmer Rouge, determined to survive so he could bear witness to what happened in the camp.

The Years of Zero guides the reader through the author’s long, desperate periods of harrowing darkness, each chapter a painting of cruelty, caprice, and courage. It follows Seng as he sneaks mice and other living food from the rice paddies where he labors, knowing that the penalty for such defiance is death. It tracks him as he tries to escape into the jungle, only to be dragged back to his camp and severely beaten. Through it all, Seng finds a way to remain whole both in body and in mind. He rallies past torture, betrayal, disease and despair, refusing at every juncture to surrender to the murderers who have stolen everything he had.

As The Years of Zero concludes, the reader will have lived what Seng lived, risked what he risked, endured what he endured, and finally celebrate with him his unlikeliest of triumphs.

By the author’s own account, it was vital for him to show readers what happened to him through the perspective of himself as a young boy.

“Most of the memoir writers have chosen to look back on the atrocities of the Khmer Rouge through a clinical lens, offering a philosophical view of the violence,” says Ty. “I couldn’t distance myself – not if I was to truly do justice to the events of my past, and tell the story of my family. How could I truly show what it was like to have my world explode all around me, to watch my mother die – if I didn’t do so from the perspective of my seven-year-old self?”

Ultimately, Ty’s story is not just of cruelty, but also one of grace and hope.

“As a child, I was cast down into hell – but I endured and more importantly, I feel that I triumphed,” says the author. “To survive was vital, but to transcend the experience – that was what allowed me to continue on with my life after my escape and adoption.”

Seng Ty’s story has been heard the world over, after he was featured prominently in a 1982 Time magazine cover story called “Children of War”—his photo, which accompanied the publisher’s letter page 3, eventually leading to his adoption by a family in Massachusetts. A year later, Ty’s account of his experiences under the Khmer Rouge dominated an article in Natural History. In November of 1984, Ty was one of 26 teens from 12 countries chosen to take part in a national Children of War tour, which ultimately gave him the opportunity to tell his story on the Phil Donahue Show and many other newspapers.

In 1999, Ty and another Cambodian refugee flew back to Cambodia with CBS correspondent Bob Simons and a 60 minutes film crew. The segment they shot, which took up two-thirds of the show, returned Ty to the labor camp where his mother, father and brother Da perished at the hands of the Khmer Rouge.

‘The Years of Zero: Coming of Age Under the Khmer Rouge’, will be released in April 17, 2014. For more information about the book, visit: http://sengty.com

About the Author: Seng Ty
Seng Ty was born in the Kampong Speu province of Cambodia, the son of a respected physician who taught him to value life, aspire to humility, and seek the good in people. He was thirteen when he made his way alone to a refugee camp in Thailand in 1981. His story was featured in TIME Magazine’s article “Children of War”, and was read by an American family in Amherst, Massachusetts, who adopted him a year later. Now he is a citizen of the United States, a husband, a father and an educator in the Lowell, MA School System.

Seng will never rid himself of his ghosts, nor will he forget the blood-chilling atrocities he has witnessed and experienced. However, he doesn’t crave revenge against those who carried out these atrocities. He desires to share his story of survival and courage only in order to give hope to others. He was one of the children of war tour in the US cities in early 1984, he shared his story through ?Phil Donahue Show, many major newspapers and CBS 60 Minutes in 1999.

Seng’s wish is that The Years of Zero will give him a platform to expand his message beyond the circle of his students in Lowell, to people all over the world who are in need of a little hope. 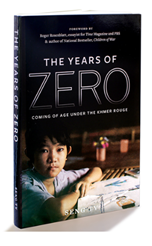