A BLAST from the PAST. New novel showcases a story of intense love and passion - engulfed by hippies, confusion and murders.

Annapolis, MD -- (SBWIRE) -- 08/09/2012 -- For many in America, the summer of 1967 was a time filled with love and peace. However, for the greater world stage, the Vietnam War was in full roar and many working class leaders were at the height of their political revolutions. Now, for the first time ever, Nick Gallicchio fuses these two worlds of fiction and fact in his new book, “Summer of Love- 1967”.

“Steven Molinaro, a prominent lawyer is gunned down on the street. The family vows revenge. Meanwhile his youngest son falls in love with the beautiful Gia Scala. Both of them brought up in the strict Italian customs, they are careful not to go beyond what is proper. But eventually their passions overcome them and they become lovers. Nick asks her hand in marriage and Gia's parents agree.

The wedding won't be till two years from now since Gia wants to finish her university education. The Molinaro family feels that Captain Petrosino is too slow in finding the killer. At the same time a psychopath roams the streets killing women. The family finds out that he's also Molinaro's murderer.

They decide to take things into their own hands and chose young Nick to pull the trigger. He is successful and the family has been avenged. The"famiglia" stands firmly together to protect Nick. No one ever finds out, not even Gia as their love grows stronger day by day.

As Gallicchio explains, the book’s setting in the late 1960s was, in complete contrast to the media’s portrayal of the hippie movement, a fraught time for global unity.

“The turbulent sixties was not a time of peace; the war in Vietnam was raging, and a psychopath was on the loose,” says Gallicchio, celebrating the launch of his third novel.

He continues, “The book recalls the tribulations of Jerry Rubin, Abbe Hoffmann and Nick Molinaro – three working class leaders who were each undergoing their own revolutions. It also introduces NYPD’s courageous detective Captain Joe Petrosino. Universal health care is a must, as is the elimination of America’s selfish, money hoarding multibillionaires. Set in North Jersey and New York City’s Greenwich Village, this is a story of love, with intense love scenes and engulfed by hippies, murders, confusion and history.”

The book has already been received into the literary world with critical acclaim. Praised for its ability to fuse the fictional facets of the author’s imagination with the undeniable facts of 1967, the title is proving popular among those who ‘were there’, as well as those who want a glimpse of the life of a previous generation.

Summer of Love – 1967 is available now, as an E-Book or Paperback, from Bucket List Publishing.

About Bucket List Publishing
Bucket List Publishing is the vision of A.W. (Art) Field LPI,SC (Ret) of Sutton West, Ontario Canada. Art, or Artie as he is sometimes called by his friends, was inspired to create this unique publishing company as a result of desperately trying to get his first book published - Everything You Need To Know Before Your Knee/Hip Surgery.

Eva Kapitan of Annapolis, Maryland, U.S.A., a special friend of Artie's wife Anneke, is also an accomplished writer with a great deal of experience and knowledge of the publishing industry. Eva holds a Bachelor of Arts degree in French and English Literature from the University of Toronto. 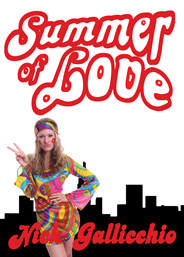