New Novel Tells out of This World Tale of Lunar Sci-Fi Challenge: Contact Aliens and Save the Moon

Gary Hocker’s debut novel takes readers on a captivating journey of one team’s attempt to save the Earth and the Moon. However, in order to succeed, they’ll first need to make contact with a destructive alien race.

Corsicana, TX -- (SBWIRE) -- 07/27/2012 -- While based on science, not fantasy, the debut novel from Gary Hocker transports readers into a situation that is beyond their wildest dreams.

Calling on all of the facets of a thrilling sci-fi classic, 2012 Lunar Contact puts the human race in a tough position – to face the possible destruction of the Earth and its Moon, or to confront those who are out to destroy it.

Official Synopsis: “An alien civilization has come to our system and it's not Earth they are interested in. It is the riches of our moon. Unfortunately their mining of the moon threatens Earth. An intrepid group of astronauts are given the mission of making contact with the aliens that have so far ignored humans. What follows is anything but what was planned, as they get swept up into a war between beings that travel faster than light and operate on a technology beyond Newtonian physics. Sci-Fi Action.”

“The bedrock of my story is deeply rooted in the world of science, not fantasy,” says Hocker, who is using the book to celebrate his first foray into the world of literature.

He continues, “It’s a story that could very well be true, who knows? Everything contained within it has a certain realistic possibility that will keep readers on the edge of their seats from start to finish.”

“What I enjoy most about the book is the pace. There is little if any filler and the book moves on,” says Derek, who reviewed the book on Amazon.com.

Another reader from New York was equally as impressed:

“Just finished this book. It was absolutely fantastic! The characters were well drawn out and the plot moved at a fast rate. I enjoyed this book very much!” she said.

Four and five-star reviews are consistent. In fact, since publication the book has rapidly moved up Amazon’s eBook charts and is currently number fourteen on the ‘100 Best Selling Science Fiction’ list.

Due to its success, Hocker has recently announced that 2012 Lunar Contact will actually form part of a series, with a sequel expected in August of this year.

“I can’t say too much about the sequel at this point. However, I am willing to divulge that it will develop the characters that were introduced in the first book and continue to follow their adventures in dealing with alien races,” Hocker concludes.

Until then 2012 Lunar Contact, published by Amazon Digital Services, is available here.

The author’s progress can also be followed on Twitter: http://www.twitter.com/JDClarke

About Gary Hocker
Gary Hocker was born in Fort Worth, Texas and received his bachelor’s degree in microbiology with a minor in chemistry. He then received his doctorate from Baylor.

Hocker grew up with an overwhelming desire to learn. He read anything he could get my hands on and he loved going over to his grandparent's house because they had a set of encyclopedias. He once spent a summer reading every single volume.

Hocker doesn’t remember when he discovered science fiction. It was after comic books. But, when he read John Carter of Mars by Edgar Rice Burroughs, he was hooked. He read the entire series. Then he began reading other classic authors like, Isaac Asimov, P.K.Dick, Arthur C. Clarke, and Robert A. Heinlein.

Although he read many other forms of fiction, science fiction has always remained Hocker’s favorite. He never dreamed he would be a writer, let alone a writer on Amazon’s best seller list. 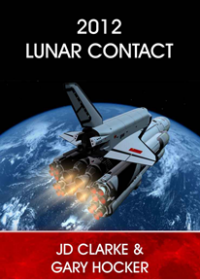