Will North Korea’s new Supreme Leader open the doors, joining the rest of the world or will he choose to carry on the family tradition of repression and secrecy? Ian R. Kelley’s new novel ‘UNCIVIL SERVANTS’ offers a fictionalized scenario of an attempt to open borders at the 38th parallel.

Tarpon Springs, FL -- (SBWIRE) -- 12/04/2012 -- Grounded in author Ian R. Kelley’s years of experience in the region, the New Novel “UNCIVIL SERVANTS” (published by iUniverse) is his extrapolation of one possible scenario of Korean reunification. Kelley writes…”with all the turmoil and unrest in the Middle East and concerns over Iran’s developing nuclear weapons, we can’t afford to forget the last remnant of the ‘Bamboo Curtain’ with nuclear strike capabilities…North Korea!”

For more than a half a century, suspicion has characterized the relationship between the communist North and the democratic South. Twelve U.S. Presidents and two despots have struggled with both words and arms to gain the upper hand but have failed, thus perpetuating the stalemate.

The Demilitarized Zone separating North and South Korea remains the longest most heavily guarded border in the world. Hostilities could flare up any minute sending the world into yet another all-out shooting war; powerful allies would be drawn into the fray. With both sides capable of nuclear strikes, there would be no winners.

Will peace ever be possible on one peninsula for two peoples, the same blood running through their veins, yet divided by an imaginary line?

Most agree the world would be a better place when and if North and South Korea unite. Others have doubts, and some in the region fear the industrial might of one Korea, and are willing to go to the extreme to prevent it...even kill!

Six nations will come together to decide the future and fate of millions, possibly the world. Three civil servants – a Korean army officer, a Japanese diplomat, and a U.S. Secret Service agent – will do whatever it takes to influence the decision. Find out who prevails and…at what cost.

Although fiction, “UNCIVIL SERVANTS” is based on facts and current-day realities. “Like the crumbling of the Berlin Wall,” Kelley writes, “no one doubts it’s simply a matter of when and how reunification of North and South Korea takes place.”

About Ian R. Kelley
Ian R. Kelley retired from the Department of Defense in 2005 with 35 years of service. He resides in Tarpon Springs, Fla. For many years, Kelley lived and worked in South Korea teaching English and communications skills to Korean and military personnel as well as serving as a professor at Keimyung College University in Daegu, South Korea. 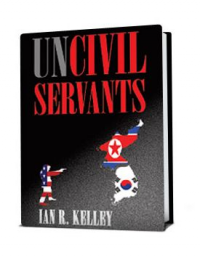