Masterfully crafted by Larry Kilham, ‘Saving Juno’ is a near-future Sci-Fi adventure that offers an entirely different perspective on the NSA and the role of wider National Security. Rather than the NSA using its ‘supercomputers’ to spy on citizens, those very computers are about to be hijacked by an international genius who wants to take over the world. Readers are invited along for the ride, as protagonist Dr. Tom Renwick tries to save Super AI Computer Juno, the NSA’s infrastructure and ultimately the world.

Santa Fe, NM -- (SBWIRE) -- 05/13/2014 -- Say “NSA” or “National Security” to anyone and they’ll roll off front-page stories of spying, Edward Snowden and their inevitable worry about what the Government knows about them. However, in a compelling new novel by Larry Kilham, the NSA themselves become victim to hijackers as the nation’s supercomputers come under attack from a genius looking to control the world.

Everything plays out in ‘Saving Juno’, volume three of the ‘Juno Trilogy’. This near-future Sci-Fi adventure continues the story of Super AI Computer Juno – this time under attack.

Super AI computer Juno has been taken over by an international computer genius. NSA’s major computer center is also being taken over. Dr. Tom Renwick, Juno’s developer, is kidnapped. Civilization as we know it is threatened. What to do?

In this fast-paced thriller, Tom’s super brain computer scientist son, Primo, is thrown into the fray. With mysterious agent, Wildflower, and trustworthy officials in Washington, Primo strikes back. Their trail to Tom is through a hall of mirrors and continuous plot twists. It ends in an orbiting computer satellite.

Written in the genre of the late Michael Crichton and the late Tom Clancy, Saving Juno presents and action-packed adventure and new ways to look at national security. This is the third volume in the Juno Trilogy. The earlier volumes are Love Byte and A Viral Affair: Surviving the Pandemic.

“This is the final book in which we see Dr. Tom Renwick battle to save Juno, his creation that is respected and adored by millions. More than losing a lifetime’s work, Juno’s potential hijacking could spark social and Governmental destruction as its new controller literally takes over the free world,” says Kilham.

Continuing, “While fictional, the narrative really does call into question what would happen if a major Government computer or system was hijacked by plotters who want to take over the country. Juno is connected to all people via the internet, so the results of losing it would be catastrophic. This gives national security an entirely new meaning….”

Reviews for the book have been overwhelmingly positive.

For example, Zelda comments, “Saving Juno is a very timely sci-fi thriller. Even tech novices like myself can get wrapped up in this thriller without getting lost in all the incredible technological details. My biggest criticism is that the page-turner ended far too quickly. A very enjoyable and educational thriller that gets you asking yourself a lot of questions.”

Reed Stevens was equally as impressed, adding, “Author Larry Kilham is an actual scientist with many patents. But in his senior years he has become more romantic, plumbing the heart's technology in a brave new world. A light read for the plane.”

About Larry Kilham
Larry Kilham is an inventor, entrepreneur, author and consultant. He has received numerous patents and awards and has published two books about inventing and high tech business development and three novels involving AI and robots in the near future.

Larry has returned to his native Santa Fe, New Mexico and is now focused on writing about future society, ecology and artificial intelligence. He has just completed his third novel in the Juno Trilogy, appropriately enough called Saving Juno.

Larry is trained in engineering and management with a BS from the University of Colorado and a MS from MIT. He belongs to several professional societies and has published widely in the technical and business media. 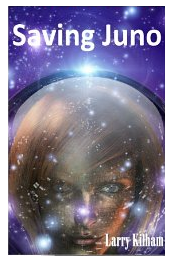